September 01, 2013
Up with a certain degree of hungover gingerness having gone very late to bed. All into the car by 11:30 however and Lorraine drove us off to Ashford to a pub restaurant called The Duke's Head, where we had a meal to celebrate Pat's 80th birthday. About two dozen friends, relatives and neighbours were there to strap on the nosebags, and it was a very happy occasion and I met a few new people, and got to know others a bit better such as Rhona and Steve, who is Pat's brother, Pete and Charlene, met cousin Tom from Ireland.

A really good Sunday roast lunch for everyone followed, for me, by lemon meringue. Sam returned to London via Ashford. The the rest of us back to Pat and Maureen's place, where Maureen made even more food of sandwiches and cake. Several funny conversations including with Rita who lives across the road being inflammatory about Beth's dad which would have been rather toe-curling if it hadn't been so funny. And Pat's brother Steve who was making everyone laugh. As we left, Steve was zooming around the house with Rita's wheeled walking frame like some kind of racing car.

Pat fondly kissing Beth and Lorraine, and shaking hands with me. Drove off and he was still waving at us, looking very chipper. Tried to picture my own 80th birthday if I am lucky enough to reach it. I am very fond of Pat and Maureen, which is an unexpected bonus. Pat is a gentle and kind man.

Betty sleeping in the back seats as Lorraine drove us towards an absolutely glorious sunset.

Home and quietly sitting about before bedtime, and Brian arrived in the room with a large freshly killed rat. A good deal of shrieking from Lorraine and Beth meant I had to wrest it from Brian, much to his disgust and mine.

Below Pat and Sam, who was bending his knees so not to tower over his grandfather. Pat and Sam have the same birthday. Pat and Maureen, with Lorraine on the left and Sam and Beth's cousin Tom on the right. We drove towards a beautiful sunset for much of the journey home. 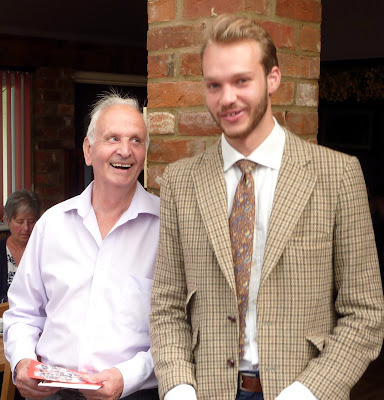 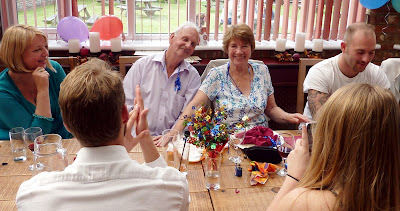 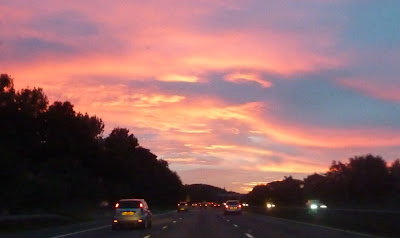