A day in London with Anton

September 21, 2013
Up several times in the night to drink water, felt rather sweaty,wan and hungover this morning. Had arranged to spend the day with Anton, as a pre-wedding treat. Got out of bed and made L and I Quorn sausage sandwiches, only to learn that Anton was waiting for me at the station. He had texted me the details a couple of days ago, but they simply had not shown up on my phone, and in replying to a later text he thought I had got the previous one. Up hastily then and rushed off to the station, where Anton and I caught a train to London Bridge.

Tubed up to Baker Street and walked to The Marylebone, where Anton ordered us two Bloody Marys - a famed hangover cure. It contained chilli flavoured vodka, tomato juice, drips of Tabasco, and a fair amount of horseradish, topped off with a dusting of black pepper and a cocktail stick with a cherry tomato on it, and a small ball of Mozzarella cheese. Absolutely delicious and made me feel somewhat Bertie Woosterish having this bracing pick me up.

At it was now lunchtime, to Meat and Liquor: an atmospheric burger place, which according to the Burger Me website Anton showed me was in London's golden burger triangle. It was mainly lit with red light, and mainly full of youngish people gorging on excellent burgers in the dark. I engorged an excellent chicken burger, and shared fries and battered pickles with Anton. Anton's fiery chilli beefburger caused him to gulp two cans of beer. This meal consumed off to Selfridges where Anton bought some highly expensive coffee and I looked at pieces of porcelain printed with meh designs costing upwards of £300 pounds a piece.

Then tubed off to Tate Britain to see the Lowry exhibition. This was surprisingly excellent, I'd always been rather lukewarm about Lowry, but found that this show changed my mind about him completely. One thing, and this is very basic, that once you grasp the idea that his people are not supposed to be representational, his work begins to fall into place. These little people creatures swarm around in their industrial landscape like the crowds in Dante. Taking a close look at the artist's brushwork too was amazing, intricate and considered. Nor was the colour palette at all naturalistic either.  Much discussion with Anton about this afterwards. Lots of favourites but liked this early one Coming out of School.

We'd also been into a room in the gallery which was hosting a music concert, and had people dancing, and a band getting ready to play. A real collision of energy in the room full of nineteenth century art.  Not sure how I felt about this. Not easy to look at the images with music thundering around, but suddenly it felt like the gallery was full of energy and it felt strangely reinvigorating.

Then we tubed back to London Bridge where we walked along by the river. This part of the river has been completely changed since the last time I spent much time there.

Then to the Design Museum. This was something of an eye opener for both of us in that it was strangely disappointing. Both of us felt it underwhelmed, finding it poorly organised and curated, and as for the design of the museum and its contents.... Pretty poor. Even the signage annoyed me. With its insistence on replacing the letter i with an exclamation mark. Wearying, like being shown the same joke twenty times.

Moved on from here walking along by the river, down cobbled backstreets, through all the new development there. Pausing every now and then for a glass of beer to refresh ourselves, and me to swear at a rude French waiter in an oyster bar. Then across the (non) wobbly bridge between Tate Modern and St Pauls. We walked past a little courtyard called Wardrobe Place, EC4 which seemed a curiously magical haven of peace.

Then to Ye Old Cheshire Cheese and managed to find seats in the old dark bar there where we had some more drinks. Then into Gerard Street Soho, to the bustling Four Seasons restaurant to eat lots of crispy duck.

The call of the seagull grew loud in us then, so we made our way back to Victoria. Missing the train by seconds. An absolutely boody final half a beer in Weatherspoons.

Boarded a train to get the journey started, and things dipped into David Lynch territory for a while. A skinny beggar came aboard with a story of needing cash for a room for the night, because he'd recently lost an arm. He was wearing a long sleeved top, with an empty sleeve dangling beside him. I could see that the way his shoulderblade was sitting meant that he was probably hiding his arm somehow. When Anton and I got off at East Croydon Anton spotted his other hand wedged in the opposite pocket. A few minutes later as we stood on the platform a young man with a terribly disfigured face, making me think of the elephant man I'm afraid, walked past with a quiet dignity. Forcibly struck by the contrast between these two people.

Some time after midnight when Anton and I made it back to Brighton Station. We'd had quite a day of culture, food, drink and walked many miles and seen many sights. A walk home, slightly footsore, before slipped gratefully into bed beside my Lorraine at about half past twelve.

Below: bloody marys like no other I'd tasted; inside Meat & Liquor, Grooving in Tate Britain, Changing face of the City complete with Lowryesque people, views from the bridge, and a glimpse into Wardrobe Place. 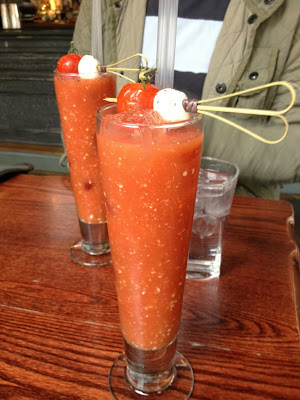 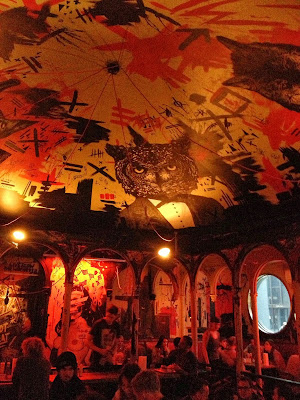 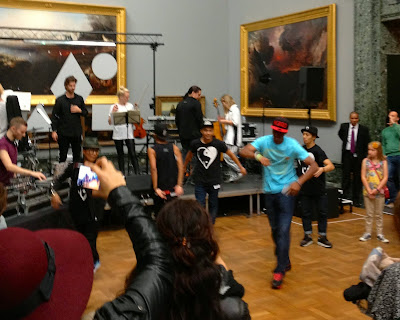 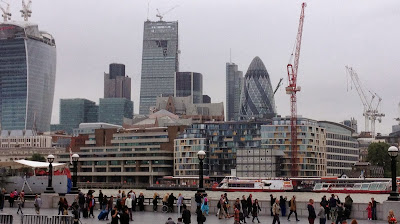 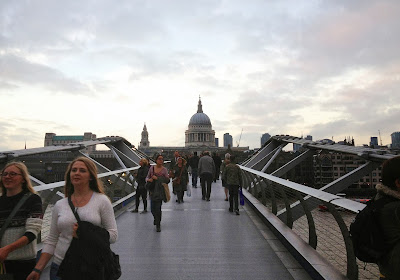 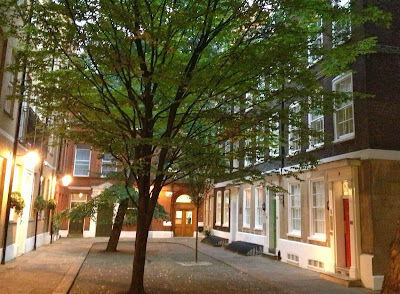