Tonight we're going to party like we're inside No.10

Felt like a new man this morning after a decent sleep. Also weighed myself for the first time in a while, and have lost a slow but steady 3kg since I began to get a grip on my grub again. There is still a way to go before I feel happier with my weight again.

Beth called this morning while we were still in bed, she is very happy about her and James exchanging on the new flat.

Lorraine off to see her old work pal Tanya for a coffee, which she enjoyed lots. She and I did lateral flow tests: negative. I made a couple of calls and did some bits, but couldn't face sitting at my computers and instead went for a walk up to the hill fort and mooched about. Felt happy to be walking today, and feeling a bit more in control of life, and work. The prospect of not working on Monday deeply appealing too. Below me, Brighton in a bit of a haze. didn't take my camera for some reason, and just set off.

Lorraine back early this afternoon, just as I returned from my walk. Peaceful afternoon, and I slept for an hour on the sofa, catching up a bit on lost sleep.

Then a frenzy of activity, readying ourselves for a dinner party, with Adele and Patrick, Sally and Marek, and Yvonne and Brian. I kept humming 'tonight we're going to party like we're inside No.10' as I hoovered (to the tune of 1999 by Prince). Too busy with my own stuff to note here how Boris Johnson really is exhausting even Tory patience. The killer blow may be that they were partying hard in No.10 the night before the Queen was socially isolating during the funeral of Prince Philip.

Marek and Sally arrived first, and not having seen Marek for a couple of years, seized him by the hand to shake it, and he yelped a bit as the tip of his finger had been sliced off  by a pane of glass during the day, and it was all bandaged. Lorraine's services called on to sort the bandage out later on. Adele, Patrick, Yvonne and Brian arrived one car.  Brian, who I'd also not seen for ages, telling me about his work with young people at the YMCA, and also his sea swimming. Patrick saying he was enjoying the new songwriting course he is attending.  Adele cheery despite being the designated driver. And Yvonne on great form.

We got deliveries from the Shahi and just talked all night, and drank wines and beers. I took no photo of the evening. So much chatting was great fun. Lorraine and I went to bed past one o'clock, which felt rebellious and reminded me of pre-pandemic times.

The sun momentarily breaking through on a hazy Brighton below. 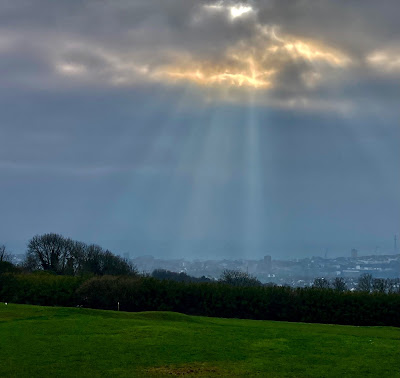 Adele and Patrick Sally and Marek Yvonne and Brian