In a bit of a frenzy trying to get everything done this morning. The Germans asking me to tweak the copy, which I did rapidly. Then, thanks to Robin's rapid response, I was able to upload the podcast. I ordered a cab with my new taxi app, and zoomed off to Hove Polyclinic for the second time this week. Hove  Polyclinic makes me feel sad, as I last went there with Janet.

Today I was twenty minutes early, and had to wait half an hour. The Phlebotomy nurse exclaimed in horror when she saw my arms: Where are they? Meaning my elusive veins. However she struck oil with the first jab.

Another cab home, to do a few more bits and pieces urgently, and have a bite to eat. Bob called, and there is a Spring meeting in the offing. Then yet another cab (rule of three). The cabby sharing his opinions, 'no offence... but people coming down from London have ruined Brighton.' Arrived at the Saint George's Inn a couple of streets below the hospital at the same moment as Anton.

The pub very nice, and almost completely empty as it was 2pm. Good news from Anton: he has been given a clean bill of health, after his weird turn towards the end of last year. No sign of anything bad going on with him, and he just gets to check in with the medical folks next year. He was a bit shellshocked by this fortunate news, but also massively relieved.

Naturally to celebrate his official reprieve we had several beers in several pubs, and ended up having a bite at The Hampton, then absolute bloody finals in the Shakey Head. Really pleased for Anton though. He has been a bit of a worry, with his weird health stuff. But all is well.

Below Anton entering the gents. The bizarre green glow like a portal into a different world. 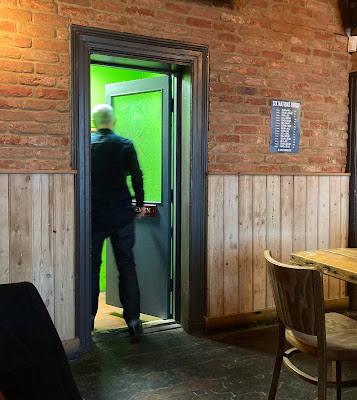