Woke this morning having had an unusually detailed dream about an Australian war poet, who flew Brewster Buffalos for the Royal Australian Air Force in the far east during world war 2.  In the dream I discovered his collected poems,  and another volume of collected letters and journals, in a bookshop and learned all about him. Woke up remembering everything except his name. I used to dream about books with my name on them. Now I dream about a dead man on the other side of the world. Made me remember the dear old Victor West, an English WW2 poet I was mates with in my twenties and thirties.

Work briefly enlived by Keith's internet going down and him having an enraged phone call with Virgin. Lost about an hour to these shenanigans. Otherwise image hunting to support our slightly strange concepts... near realistic busts of people made out of fabric, people staring through ice, medical doctors from the seventies and eighties etc. etc. Yesterday Ffion, one of Keith's daughters, popped up onscreen to say hi. Keith said that our faces had been seen on a projector in the school assembly as she talked about her day of work experience with her dad. A vision that can only have alarmed the younger kids.

Otherwise. I walked about in the outside world when possible. I chatted with Sam and Lorraine and Anton. I cooked Thai prawn curry. I watched the involving The Expanse with Lorraine. I went to bed.

Below, an Australian Brewster Buffalo. Not an aircraft I have given much consideration to, until today. 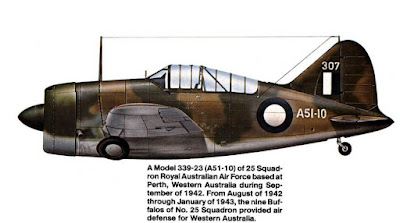