A day to do Peter Kenny stuff unhindered. And the last one of January. I always dislike Januaries, and although I am loathe to let time slip by, January slipping past I can deal with.

I am listening to The Confident Mind, by Dr Nate Zinsser on audible. As its title suggests it focuses mainly on confidence and as I regularly experience confidence crashes and lapses I am hoping it will prove useful. It's all very American,  pumped and performance oriented with particularly tedious examples from US sports and the military. But there are clever strategies in there too. I was listening to this while on two walks, and like using this sort of books to catalyse my own reviews of how I go about things, and to be reminded about the virtues of thinking positively.

Received poetry two rejections, both however full of encouragement,  one was for the collection MS, which I sent out knowing it was a work in progress, so felt fine about that. While the magazine editor said she'd has no doubt I'd be able to place the poems elsewhere. But luckily I was already in the business of reframing things, which also helped. A little emerging clarity in my head about what needs to be done.

Johnson's government trying to obfuscate and lie their way out of trouble again. The Sue Gray report partially published, but they have managed to draw its fangs, by creating confusion and delay and involving the police so that there overlapping interests. The result is a partial, and partially redacted report. A government of barefaced liars.

Spoke to the Tobster this evening. More cheery as lockdown rules are relaxed again a bit. He managed to escape from Ottawa having spent some time there, as the city became besieged by an army of lunatic far right Antivax Truckers, called 'the freedom convoy'.

Sam back in Brighton this evening, but we did not see him as he went straight to a pub from the station.

Another beautiful day. A glimpse of streets across the road from the golf course. 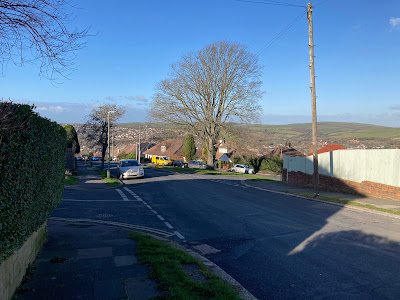