October 25, 2017
To work again. At last some information about what they want me to be doing, and confirmation that I will have to go to Vienna at the end of November for four days. The American senior account woman, who is very chatty and bubbly, came and high-fived me at one point for writing a letter.

Briefly mooching about at lunch, as today they had given me a long list of work that needed to be done. A bit of inter agency banter on Facebook today. The French Bloke posted a picture of his office again, looking out of the window onto the River and all its intriguing fowl at Sunbury. I stood up and photographed a nasty bit of Paddington, with a jealous Bah! Robbie snuck a photo of me hunched over my laptop, with a Bah! And Matty boy posted a photo of Bei Li standing at his desk in Chiswick.

The big thing today was my poetry reading. Was fairly nervous about this all day. I felt underprepared. Also no chance to go through anything, or do any kind of rehearsal at all. Was even a bit twitchy about reaching the venue in time. However all was well, and I bumped into Sarah Barnsley at Brighton Station, where despite not eating I balked at buying a small sausage roll for £3.99.

TO the venue, and it was literally full of friends and loved ones. Bumped into Betty, John and James and Hus, downstairs. Lorraine was in the venue, having swept past the door woman with 'my husband's the poet'. Inside I found Lorraine with Dawn, Catherine and Tanya. I spotted Rosie, Innis and Finlay were there too. To my surprise Anton arrived too. Of poetical friends, I was reading with Charlotte Gann, and Brendan Cleary. Bit nervous of this as Brendan is an accomplished and famous poet and reader. Charlotte is quite simply a brilliant poet. Robin was there and Steven Bone, and Marion Tracey. In short I was more among friends than I have ever been at a reading. The Nightingale Room was full, and it was quite a bit busier than it had been last month. I'd say there were about 50 people. Michaela Ridgway organises it, and she does a great job. Was surprised too at the end of the evening, she pressed some cash into my hand for the reading too.

Charlotte read first, after lengthy introductions, from our host called Robin (not my pal Robin) who also spoke a verse from the Koran in Arabic, which rather surprised Hus, who talked to him about it afterwards. Charlotte read really well, despite a distant fire alarm going off during her reading. This unfortunate, although it did go perfectly with her subject matter. She read again in the second half, this time without fire alarm. When I went on stage the second time I urged people to buy Charlotte's book.

Then it was my turn, and although I started nervously I quickly got into feeling more relaxed. My policy now is to be as real as I can, have no airs and graces. I said words to the effect that these poems didn't come out of nowhere, they came from me and the life I lived.  I talked about struggling with anxiety in my 20s, and how this gave rise to curiously calm poems about Guernsey. I also delved unashamedly into the back catalogue. I started off with The Next Wish,  then The Boy Who Fell Upwards, then I talked about monsters and read Minotaur and Someone-else's Patch (or S-E's Wuss, as Anton calls it) then I read 1,000 Miles from Sea about Chad, and ended with Touchstone, back to a poem about Guernsey. In my second reading, I read new things: three poems from Sin Cycle, the collection of 24 short poems I've been tinkering with, plus a new poem Chrononaut (which is several years old, but I have completely rewritten it). My poems and performance went down well, and I felt the audience were completely supportive. It was the opposite to an anxiety dream, I had lines, and the audience was full of friends and attentive strangers. Just a lovely and memorable moment for me.

Brendan Cleary was fascinating. I had seen him read before, and many years ago had a one to one session with him for a few hours in Brighton. He was dealing in poetry, and in life, with the recent deaths of loved ones. He was very warm after the show, and we got to have a chat. I was amazed that he remembered our session ten years ago.

A few drinks afterwards, and lots of hugs and kisses with folks. Hus bought Lorraine and I a drink to celebrate our wedding anniversary tomorrow. Then Lorraine and I jumped into a taxi, and made off.

Climbing into bed with Lorraine, received a message from Charlotte which said: You... were magnificent. Such a star. And perhaps the most LIKED man I know! What a way to end the day.

Below photos Lorraine took of the three poets. The amazing Brendan Cleary and Charlotte Gann, and me with excellent shoes. 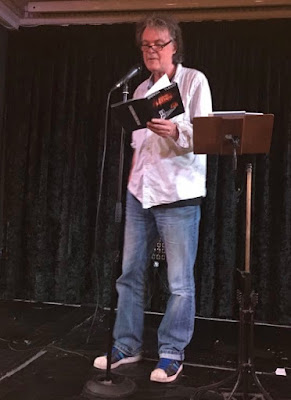 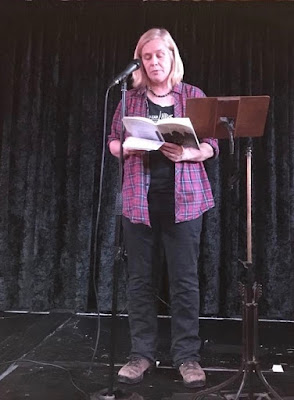 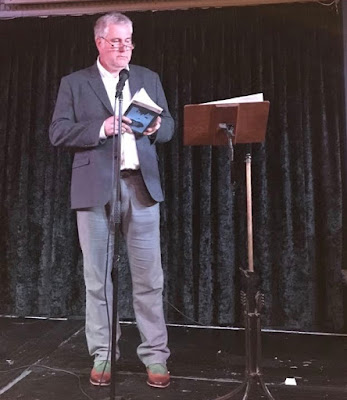