Life Jim, but not as we know it

October 16, 2017
Disturbed, anxious dreams. Woke up early to a rejection from The Stockholm Review. Up and onto my French work, which was pinged back and forth across the English Channel all day. I went for a couple of short walks while waiting for everything to sort itself out. Dwelling in Facebook all day, lots of women I know using the #metoo hashtag, saying they had been sexually abused.

Meanwhile, in the afternoon a weirdly orange darkness descended. Shortly before three I could not make out the numbers or letters on my keyboard, even though I was sitting by my window. Brian and I went outside to investigate, and the sky was thickly overcast, with a faint orange tinge and letting no light through. It was bizarre. The mix of Saharan sand and Portuguese wildfire smoke, and been dragged up by ex-hurricane Ophelia which was currently blowing the cobwebs off Eire. It was unnaturally warm too, for an October day.

I sent a tweet out about it. Turned out my most popular tweet to date would be about the blinking weather. After an hour or so, the sky began to brighten and it grew breezier, and the sunset was a strange purple and pink. My pal Reuben wrote on Facebook: "The women are all talking about sexual harassment and abuse. The men are all talking about the sky. A day to remember."

Spoke to Mum and Mas this evening, then prepared food for my lovely wife, who returned home from school fairly unscathed. Watched the new Star Trek, which I am enjoying. I imagine old school trekkies are going mad though. The characters said 'fuck' at one point, and there was some quite nasty violence, and two of the male characters are in a relationship. It's life Jim, but not as we know it.

Below disappointingly, the weird orangey quality of the light nor the darkness were caught on my iPhone. 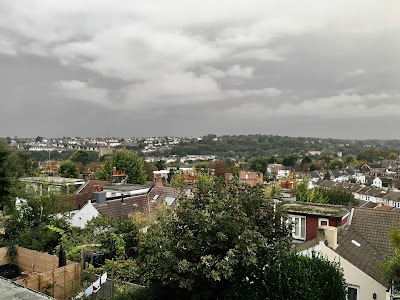 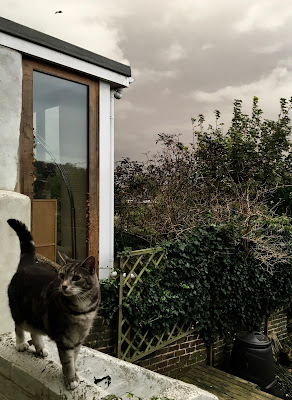 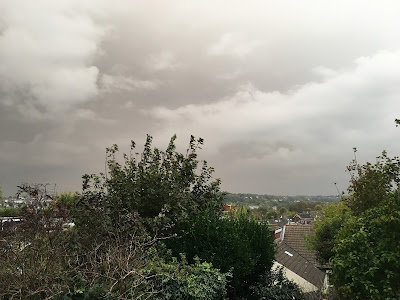 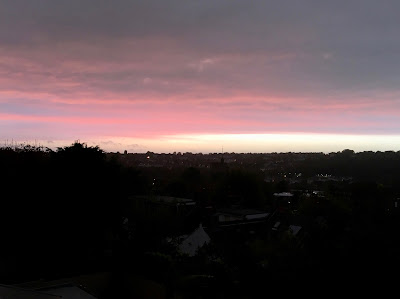 A said…
I think perhaps your Iphone may be set to Auto White Balance as a default, so it just corrected it. Nice pics, though…
1:13 pm