A fair amount of dancing by night

October 28, 2017
Calliope woke me up at seven, and once she and Brian were fed, I simply took cups of tea up to bed and caught up with this blog for a bit. Lorraine got up, went down the road and bought some bread and made us a bacon and egg sandwiches, and then simply came back to bed again.

Eventually we got up and went into town. I asked the lady bus driver to wait for a pensioner who was struggling to catch the bus, and found myself being told off in no uncertain terms for telling people how to do their jobs. Pensioner boarded, however.  In town I bought three belts, and Lorraine and I mooched about for a bit before heading home again. I had a judicious afternoon snooze, and then we went out again. Bus this time to Hove where we bought a few beers and went to Beth and John's flat where we had pizzas. Really nice to see Beth and John again. Beth has secured work as a Christmas Elf. Looking forward to the elfies on Facebook already. Lorraine and I met John's brother Dan for the first time. Dan lives in Acton, an area I know well. Then off to The Exchange pub, where John's bandmates Matt and Ed were going to play.

Dawn and her pal Charlotte were already there. And we bumped into Lesley Fairburn again, who had sung with Lorraine in the choir, and I got talking to her friend Dave, who was a really interesting guy who had built a charity. Talking to Ed about bass guitars, talking to Ed about songwriting afterwards too. In fact I did a fair amount of talking. And then a fair amount of dancing too. In fact we were all dancing lots.

Lorraine and I cabbed it home. My top hat slightly askew.

Below the band, Matt, John, and Ed, and John at the drums. 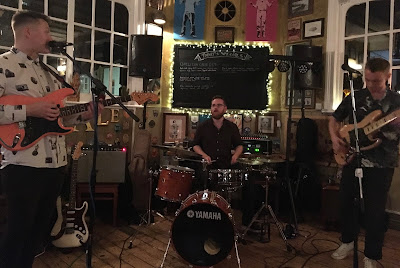 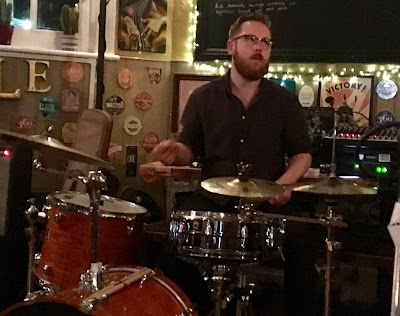 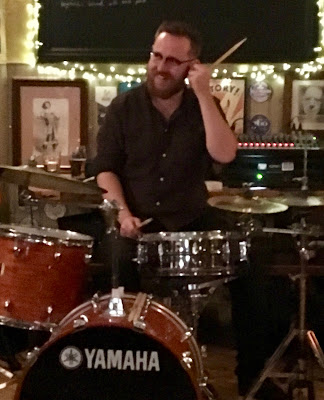