A bit of Lamb on my birthday

October 12, 2017
My birthday. Lorraine gave me a book on stained glass, and is going to send me on a stained glass window course, which will be wonderful as I love them and have often talked about this, without actually doing anything about it. Now I shall do something about it.

Dozens of messages today wishing me a happy birthday, most of them through Facebook, but e-cards and, actual cards from Janet and Ken, and Maureen and Pat, and emails and so on, calls from Mum and Beth. Felt very touched by these, and the affection they represented.

And for my business conundrums, everything fell perfectly into place. The folks in Paddington did want me after all. This was reassuring as I was beginning to think I had completely misinterpreted everything. Plus they are happy for me to start once I have sorted out the work I need to do for my French clients. All in all, it couldn't have worked out better.

Heard people discussing The diary of Adrian Mole on the radio the other day, which is a bit Pooterish, and downloaded it as an audiobook, have almost finished it. It is really well done, and made me laugh a few times, and smile many more. It is also quite sad, which is a good undercurrent for a comedy. Listened to this today as I was mooching about in the park this afternoon, just walking and savouring my freedom as this will be in short supply for the next couple of months.

In the evening Lorraine and I drove down to Concorde 2 to see Lamb, a group Lorraine had seen before and loves. I knew a couple of their tracks before I met Lorraine, and really liked them. Nice to be out on a school night, and I like Concorde 2 as it is by the edge of the sea, so you spill out into the night sea air afterwards, which is always nice. Lamb were supported by a young lad called Reuben, who turned out to be the son of Lamb's singer Louise Rhodes, and songwriter whose beats were interesting, although it was a bit like watching a kid in his bedroom. Then a new group called Aya, who were two musical sisters, who weren't bad. Lamb were terrific, really exciting music full of energy with lots of dynamics, slow thoughtful passages with rather lively ones, some lovely Miles Davisish trumpet playing going on too. Lamb are built around Louise Rhodes, and Andrew Barlow, who is from Brighton. It was a bit of a homecoming gig then, and Andrew had lots of his pals in the audience. An excellent night, and we both really enjoyed ourselves. Felt transported by their music at times. If you don't know them, here's a link to a song called 'Gabriel'.

Below Reuben, Aya, and Lamb. 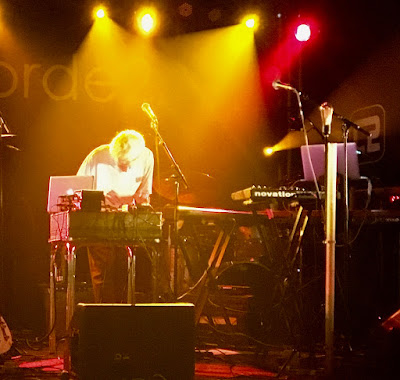 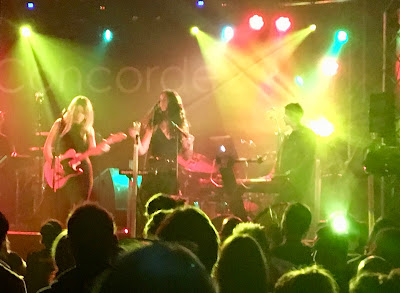 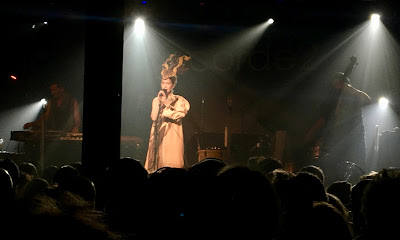