October 05, 2017
So I happened to watch Theresa May's speech today. I am occasionally drawn to watching big political speeches. I remember watching Neil Kinnock's electrifying speech in 1985 when he threw Militant Tendency out of the Labour party, which was electrifying. With the embattled position of Theresa May, I thought it might be interesting political theatre. The resultant speech, which I watched about an hour after it was made, having caught a snatch of chat about it on Radio 4, was as other people have said an appalling anxiety nightmare of a speech. First being handed a P45 by a comedian who is then gives the thumbs up to Boris Johnstone saying 'Job Done, Boris.' Then the struggles with her voice began, and she almost lost her voice completely with 25 minutes to go. Her chancellor having to hand her a throat pastille. And then, the inane slogan on the set behind her beginning to shed letters towards the end of the speech. None of these things were within her control. She looked as if she wanted to cry afterwards. It was compelling.

In other news I fiddled with bits of my own writing, without making enormous progress, did some wall scraping, and appear to be on the way to securing a big chunk of freelance work up in London, which would be excellent for the Kenny coffers.

In the evening I walked over to Hove where I met Beth in the Wick Inn. Really nice to see her, looking glowy with general happiness. A fast beer in there and we were soon joined by John. The three of us went down to The Brunswick where in the cellar bar was a funk jam night, a night organised by Lene's new finance. Lene was there, sparkling from the finger. Her finance was a funky saxophone player. On the way down, Beth and John said they were there to watch and they wouldn't take part. Beth was bullied by Lene to sing, and she sang Son of a Preacher Man, very nicely indeed. And then John sat in, and did absolutely excellently on drums. Just a very cool scene with lots of funky stuff being played by a revolving cast of musicians. Including a tap-dancer, who I think was the same bloke I saw here, and a slender young woman who jumped out from behind the bar to absolutely let rip vocally, before scampering back to the bar.

Walked home from Hove after the gig was done, and much more my scene than the ear-bleeding one I went to yesterday. Fond farewells with Beth and John in Hove, and then I walked home to make sure I got my ten thousand paces under my belt for the day. Sat up and watched a political show about the day's events before heading for bed.

Below, Beth 'I'm absolutely not going to sing' singing Son of a Preacher Man, and John, 'I don't really like sitting in' sitting in on drums, and playing a blinder. 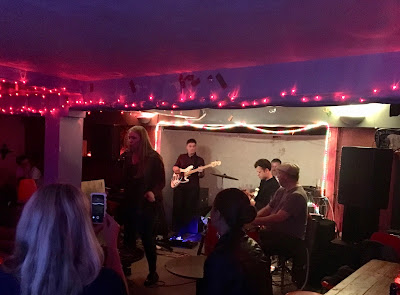 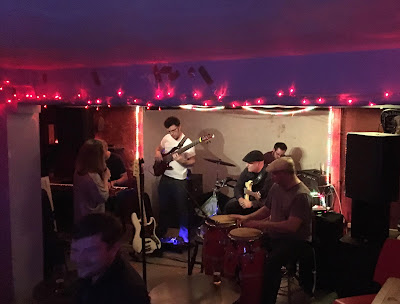