October 11, 2017
Up later than the larks, as Lorraine had a meeting to attend first thing, which paradoxically meant she could get out of bed at 7 not 6. Spoke to her a couple of times during the day. A bit of a tough patch at school.  This morning my lovely French clients got in touch and offered me work next week. This left me with a dilemma. I told Val in Paris that I was waiting for a decision on the job in Paddington, and would get back to her by the end of the day. Val said she was only accepting this work, if she knew I could do it, and needed to know. I messaged the Paddington folks politely pressing them for their already overdue decision.

While waiting for all this to sort itself out, I mooched into town buy some eczema cream, and then I mooched into the Art Gallery as there was a sudden downpour. I took the opportunity to see some paintings by Glyn Philpot, 1884-1937, some of which I quite liked. Including a portrait of a seated woman, called Portrait of Mrs Woolmer. I just loved the colour combinations, and looked  closely at the deft touches of red in the fold of her hand, near the green bracelet somehow made the tawny and grey sing. Lovely stuff.

From there, I walked through the puddles to the pier and peered from the end of it out to the wind farm, a little on one part of the horizon. It was a windy day, and sea was foamy. But the wind farm isn't working yet. I am looking forward to seeing their arms circling, and hoping I will learn to love this addition to Brighton. While I totally approve of harvesting the wind instead of, say, fracking up the countryside, there is something about a horizon which suggests in the sensitive poetic soul the notion of infinity. If the horizon is cluttered it spoils this. On balance, however, I'd rather they were there than not there.

Walked home, through town and the park, and took stock. By the end of the day the folks in Paddington had still not responded. Spoke to Lorraine, for a quick reality check, then called Val and accepted her job. Otherwise I could have lost both, and my gut tells me something's awry with the Paddington biz. As soon as I had made this decision and had spoken to Val, I felt like I had taken control of my own life again, and was no longer in limbo.

Cooked a rather good, predominantly vegetarian chilli, and served it up to Lorraine when she got home. A quiet night.

Below the Portrait of Mrs Woolmer. The colour hasn't come out properly. If you enlarge the sea pictures you can just spot the wind farm on the horizon. 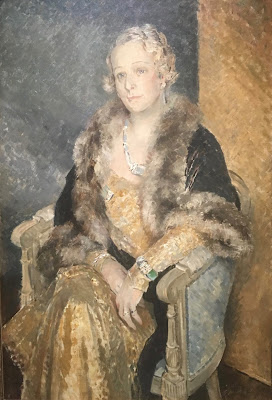 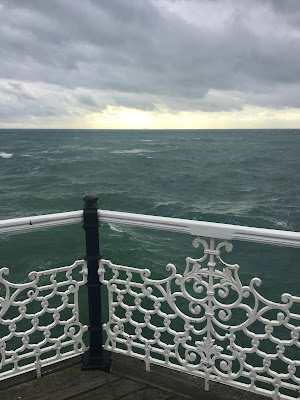 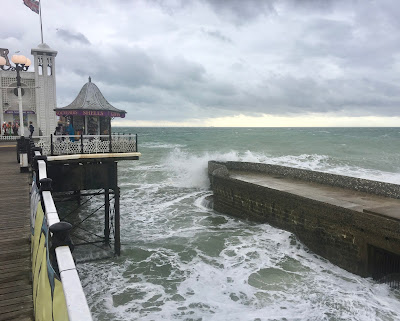 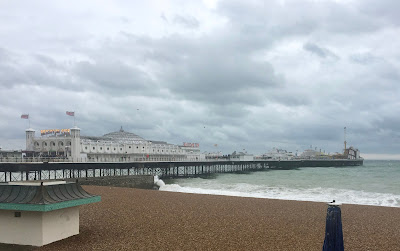 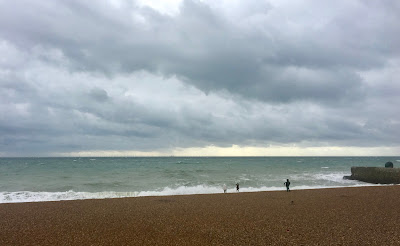