A symphony of delights

October 06, 2017
Up this morning, and after a pre-Sonia tidy, a spot of work, I zoomed up to London, and travelled to Maida Vale to meet Mum. Had to go on the Backerloo line for a couple of stops, which is one of the noodle thin ones that give me claustrophobia. I managed it, not having done this for a while, and came out and as I was unfeasibly early had some coffee. When Mum came we walked off to the BBC studios there for more music.

A long queue which we had to stand in for half an hour or so, chatting. It was a recording of four contemporary British composers. Into the recording studio, which seemed immense and was miked up for the full BBC Symphony Orchestra.

For long pieces, the first called Endangered written by Rachel Portman was a bit film music like, and was about endangered species.  The second piece by Edwin Rozburgh, Concerto for Piano and Wind Orchestra, was more challenging  between a dialogue between a pianist, playing a bazillion notes, and the wind sections of the orchestra. It had percussion too. Full of interesting tones and moments. After a break, there was a piece by Sally Beamish, called Diodati, written with Mary Shelley in mind.   All these pieces really worth hearing. The last piece was by Gordon Crosse, called Symphony No. 3, 'Between Despair and Dawn', which was rather spellbinding and moving. Both Mum and I liked this the most. They are going to be broadcast on 27th October, 3:30 pm on R3. I'd like to hear the Crosse piece once again. Rachel Portman, Edwin Roxburgh and Gordon Cross, were all there. Both of the men were 80, and there was something I found particularly moving about seeing these older guys receiving acclaim for producing work of such amazing quality.

I really enjoyed seeing mum and going to this concert with her. We enjoyed dissecting it on the way back to the tube station.

Then I zoomed home as Lorraine, and we went straight out to the Preston Park Tavern for a bite to eat. I had missed her lots over the week, especially waking up in the middle of the night and only seeing cats and no wives. We had some food, and a quick drink. Heard about all her adventures on the Isle of Wight with the children. She was exhausted, but it had been a really good week with loads of rewarding teacher moments from the sound of it.

Home to watch this week's new Star Trek episode. The new series seems a lot darker and edgier, and I am enjoying it. Lorraine absolutely exhausted, however, and we both crept off to bed really early.

Below a photo Mum didn't want to be in, with me featuring flaking eyebrow eczema, sitting in the back row of the small studio audience. The BBC symphony orchestra getting ready. The lighting was a bit cold and bright, but the music was fab. 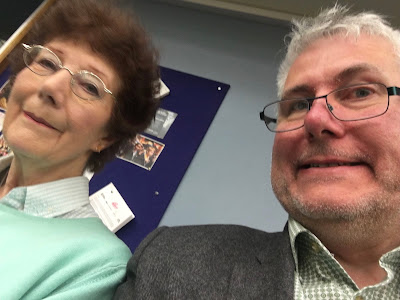 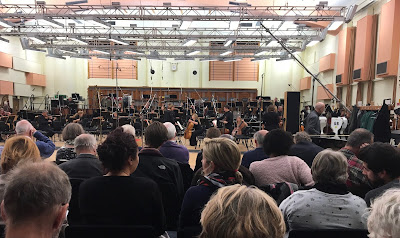