Up with the floorboards

January 15, 2018
Up on with Monday. Talk of Blue Monday again, not that I buy into these things, but with dark grey skies and the rain pouring out of it, I counted my lucky stars that I wasn't pressed in a train somewhere in South London.

Hus came around with a friend and pulled up the floorboards in the hallway. Turns out it wasn't as bad as I feared. After a few hours work, they had fixed it. He is coming around tomorrow just to finish off. It did mean the day was full of banging and crashing which didn't help my concentration any. At one point they left to buy wood, and Calliope of course dived into the hole and disappeared for quite a while, leaving me to picture her being boarded in. But she emerged covered in dust some time later.

I continued the Great Sort Out , and going through various files and throwing stuff out, and tidying cupboards. It feels quite good. Also working on poems and having a long cold look at all my current activities. I spoke to Mum too, and Mas is still in hospital, and will be for the next two days at least until they finish testing him.

Went for a walk in the afternoon after Hus was done. I am listening to The Fire and the Fury, the book about Trump at the moment. As expected, it is damning. Fascinating in parts, but not particularly well written.

Ocean Vuong won the T.S.Eliot award today. I wasn't wildly impressed by his work on first hearing it,  although he did whisper a breath of fresh air into the room, and his work was about something real and important. I shall buy his book I think.

Lorraine home late, and we ate reheated biryani, which was as good the second time around, and went to bed early as neither of us had slept well last night.

Clouds I spotted on my walk in the afternoon. 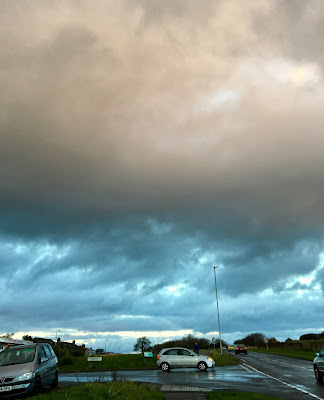