January 17, 2018
Spoke to Mum twice today, and Mason has been released back into the wild, which is very good news.

Another very productive day. It felt like some kind of turning point. After several hours, I finished my draft of Sin Cycle and have sent it to Sarah, Robin and Charlotte, who have all said they don't mind having it inflicted on them. After this I sent my children's novel out to two more agents, having had no response from the last one I sent it to. My targets this year to improve my resilience in the face of inertia and my networking. I need continuous but sustainable effort.

This made me feel in a good mood. I went for a long walk down to the sea to celebrate, and felt cheered in the sunlight and fresh air. I bought Jacqueline Saphra's book All My Mad Mothers (she was one of the T.S. Eliot prize readers on Sunday. I have also sent off for the collections from Ocean Vuong and James Sheard). And simply walked home again to do some more work, and then read some of Saphra's poems.

Lorraine home a bit late. A Sainsbury's delivery from a loquacious driver, who even before he had stepped in our house dramatically announcing, 'I have good news and bad news' about something that needed to be substituted.

Lorraine keen on a French cop show we watched tonight called Spiral, whose second episode started today with a severed head in a sink. I like how it is written, with lots of moral ambiguity in the characters.

Below the low sunlight made the views from the pier dramatic. 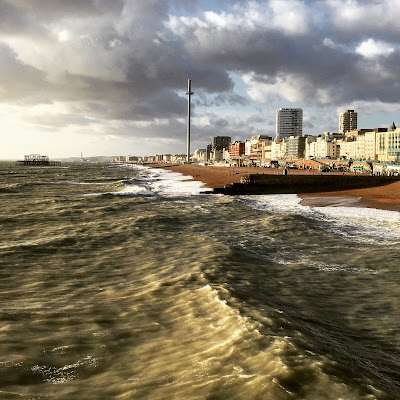 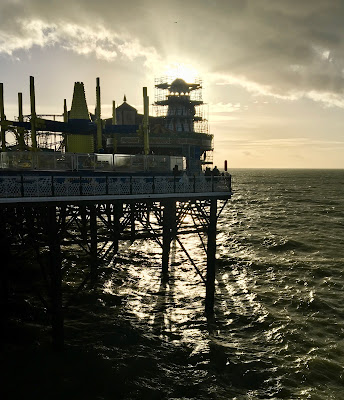