January 01, 2018
Monday 1st January 2018. Lorraine and I spent the day happily sealed in our domestic bubble. Breakfast in bed, and hauling things around in the house, such as the futon from downstairs to the big bedroom, which suddenly made our living room seem large and airy. All this seemed to take up lots of time, but we felt happy with ourselves when it was done.

Spoke to Mum on FaceTime, and saw some photos Toby had put on Facebook from his trip to Japan. Blue and crisp skies and scenery, as opposed to the overcast skies and steady rain here.

Lorraine coming up with another culinary marvel of a cheesy sauce and pasta. We also played a couple of games of scrabble. In the evening we watched a couple of programmes about the rock group Queen. A happy day, if not terribly eventful, for the first of the year. I am feeling lucky and well disposed to life at the moment.

I also had a Proustian moment. I opened a bottle of Greene King IPA, a beer I can't remember drinking before, and as I inhaled its hoppiness it suddenly took me back to the IPA my grandparents had in Guernsey. They used to keep bottles of IPA and Pony ale under the stairs, and I can't remember if they were Randalls Bobby IPA, or Guernsey Brewery IPA.

As for New Year's resolutions I have none, other than a need to ruthlessly declutter. I'll start with my office. 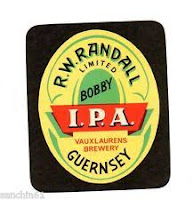