Through a glass brightly

January 19, 2018
Up a bit late, but early enough to say hello to Dawn and Lorraine before they went.

A spot of work in my study before setting off to Evolution Arts to start my beginners course in Stained Glass that Lorraine had bought me for my birthday last year. Up a couple of flights of stairs to an art room, which reminded me of being at school a bit. Art rooms are great places. Three other newbies, all retired. Ben our teacher, and another student who had attended before and was working on his own project. Basics today, scoring the glass with a glass cutter and tapping the glass to break the section off. Then learning to bite off bits of glass, with pliers and a curved lead knife. Started to cut bits of glass off, and then we started work on our first practice project, which is a square made of four plain pieces of glass, and a circle of glass for the centre. Managed to cut three or four of the pieces, with a quarter circle cut out of the corner of each.  A nice chat with Ben after the class when I hung about like a swat, where I enthused about glass and told him about an idea I had, which enthused him and he we looked at overlapping pieces of glass together.  Really enjoyed the session, and enthused about glass in general.

Went for a coffee next door afterwards and bumped into the guy who had been sitting opposite me, and nice guy called Chris, a retired teacher. A good chat with hm about glass, and Shakespeare.

Then I bought a small baguette and fizzy water from pret and walked down to the Pier. Outside the pier I opened my bottle of water and it erupted all over me. Then walking onto the pier I took a bite out of my baguette. Within seconds I was attacked by three seagulls, one of whom grabbed the end of my baguette. It would have taken a pterodactyl to wrest food out of my hands, but I had to pinch off the beaked end, and eat the rest under a low roof, warily looking at the sky.

Then to Starbucks where I did some reading, before eventually getting a bus back homewards for four.

Spoke to Mum, and enthused about stained glass. Mas settling in back at home again.

A happy evening with Lorraine popping out for a single beer in the Park View while we waited for Red Chillies to cook our meal.

Home and we watched When Harry Met Sally, on TV, as Lorraine had never seen it. I like a good romcom, and hadn't seen this film for about 20 years.

Below the basic tools of glassmaking, and a screen faced thing seen in a Brighton pop-up show window. I like its wirey little heart. 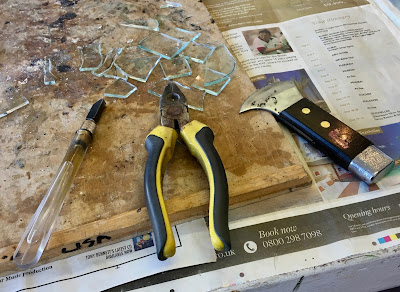 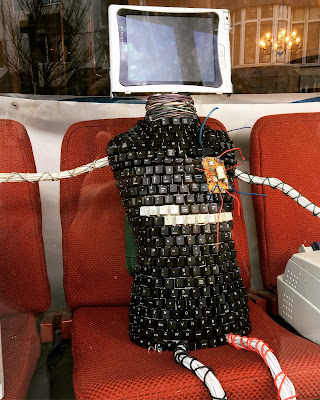