January 16, 2018
Terrible night's sleep but a productive day. Feeling more positive and purposeful than I have in some time.

Lorraine waking up, then once I was thoroughly awake, went to sleep again after I had put my hand on her shoulder, which magically sent her to sleep as it does quite often.  I was in the wide awake club however.  I dropped off for a few minutes just before I got up, but  I woke up shouting No! After a quick nightmare about Calliope leaping at a magpie, which flew high up with her. After this I simply got up instead, looking out of my study window half expecting the scene to enact itself outside my study window.

Had a very good day's work, starting very early, which made me feel happier than I have felt for a while. I have also almost finished the group of poems I'm calling Sin Cycle, which I feel quite pleased with. They are freer, more irreverent and funnier than poems I have written before, but no less serious. I spent much of the day happily buffing them up.

Hus came around and finished off the floorboards work, which necessitated a good deal of banging and crashing. Had a coffee with him, and chatted. I like Hus. Spoke to Mum, and briefly to Janet. In the afternoon I went for a walk for getting on for two hours while listening to Woolf's Fire and Fury which is funny and depressing by turn. The characters described in it are vile. I wonder what Woolf is like.

More work on Sin Cycle when home, then I cooked a vegetable surprise when Lorraine got home. Back on Netflix and saw an episode of the new Star Trek, set in a parallel universe where Star Trek folks were bad. I remember an episode like that from the first series.

Below the entrance to the walled garden I popped into on my long walk. 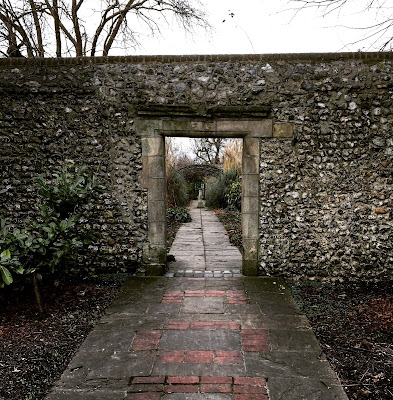