January 10, 2018
A brilliant start to the day, with Lorraine bringing me tea in bed. The day became slightly trying due to assorted first world problems not worth reporting. Not making as much progress as I had hoped, although had got a good idea down for a poem. Enjoyed cooking a big vat of turkey and vegetable soup, which I helped myself to liberally for lunch. In the evening out with Anton. I took an extended walk before I met him in the Joker as I'd cooped myself up all day.

There have been changes afoot in the world of chilli chicken wings. The purveyors of Woof Woof Wings have moved on from The Joker, to be replaced by another team who also serve chilli chicken wings with a different name. I suspect fowl play. While the new wings were perfectly okay, they were not the same as bone fide woof woofs. We had some grub there, and a couple of refreshing lagers, then at my request, we went back to the Mitre Tavern, a pub in Baker Street. This should be called the Tardis Tavern as it is like going back in time to around 1980. Most of the people look as if they've been sitting there since 1980 too. Anton was a bit sniffy about it, but I pointed out that people pay good money to go to foreign countries, but here you could visit the past for the price of a pint. On the way out I began to wonder if it hadn't actually been full of ghosts, and it might be completely different if we stepped through the door again.

There was much to discuss with Anton, mainly about Life with a capital L. So we went to The Great Eastern too. Here we sat next to a couple who were on their first date, but were quite chatty to us. The Great Eastern on a dark January midweek night like this a very nice place to be, being warm and cheery and not too crowded.

Fond farewells to Anton, and then home where I crept about quietly so as not to disturb Lorraine.

Below a quiet corner of The Great Eastern. 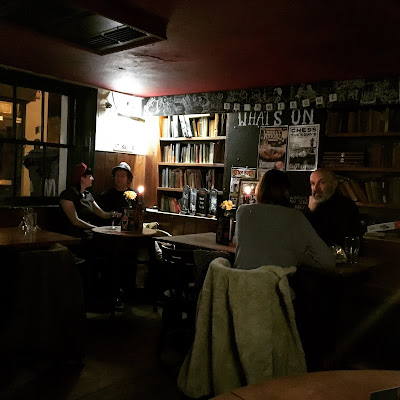 Anton The Great Eastern The Mitre