December 18, 2017
Up with a sore throat and under the weather. Really bad night's sleep for some reason, and Calliope waking me up at least twice my crawling onto me in the night. Lorraine had one of her periodic bouts of sleeping hiccups, which she is blissfully unaware of.

My lovely wife brought me a cup of tea, and I manned up and got on with various chores of which there are many. Then I girded the PK loins and went shopping. It wasn't too busy, and I managed to go about a good deal of my business without going mental. I began to feel a bit dazed and had a disturbing incident in the men's loos. The main toilets in Churchill Square were closed, but there was a woman standing outside them whose job it was to point people upstairs to the ones just past Spud U Like. In the toilet was a high trough, with a man standing at the far end. I almost began before I realised only just in time that I was standing by a long trough-like sink and not a urinal. I must be going mad.

Next I made my way downstairs to the Santa's grotto where Betty is queen of the elves. The grotto was black, and Santa's bunkerish. However I went to the exit, where I glimpsed an elf on its knees hard at work sorting out presents for the nippers. It proved to be Betty and she popped out for a moment, and I snapped her.

A bit more shopping, and Anton phoned me to find out my address. Eventually I skipped aboard a 5b and was home, where I crashed out, and went fast asleep for an hour. Revived to watch a documentary about the making of American Pie, the LP by Don McLean, and cook a curry for Lorraine. An evening indoors on the gold sofa with Lorraine. Lovely. 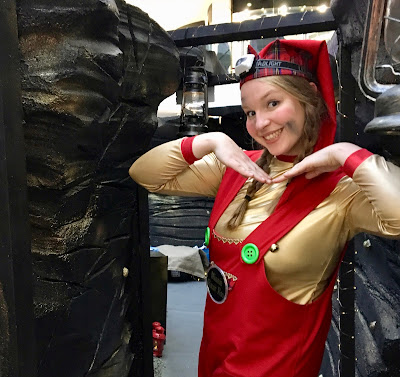 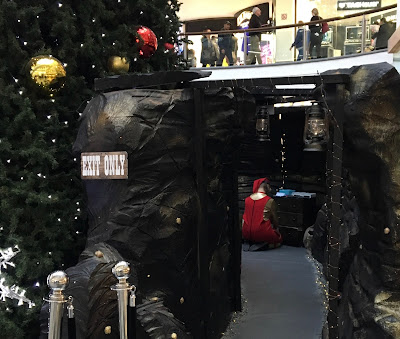