A day and evening by the Thames

December 06, 2017
Off to Hampton this morning. A bit of train kerfuffle, trains cancelled and went on autopilot Victoria instead of Clapham, but all was well in the end.

Basically spent the day with several of my old muckers. Went to the French Bloke, Perky and Pat's agency in Hampton by the river. Keith was there too, and I shared a desk with him. Briefed on the job by the FB sitting on a bench in the cold looking at the river. Michel interrupting himself by saying Oh look, a grebe!

Walked off to buy a pie with Pat and Keith at lunchtime from a shop in Hampton village. A saunter back. In the afternoon the FB strapped his headphones on and began squeaking his motorbike leather clad leg as he began to listen to some unknown tune. I mentioned to the others that it sounded like a teenager's bedroom, and a few of us snickered somewhat as the FB manfully squeaked on.

Everyone left he agency quite early, and Keith gave me a lift to Kew in a nice little MG sports car, we  were laughing like drains driving along. Lynne, from the Paddington agency phoned me, and was saying that people weren't scared enough of her. She is extremely nice woman from the South sea islands. The people I went to Austria with are quite scared of her, and when I asked her why, she said, 'my people ate their people', which made me laugh. Keith and I drove on, talking obsessively about fish for some reason he has developed an obsessional interest in a new aquarium, which he says is a money pit into which he has poured loads of cash.

Dropped off in Kew, close to where I had once lived. Walking towards Kew Bridge I spoke to Mum, who said she had had a brilliant time with Romy in Amsterdam. Really pleased to hear that.

I walked to Kew Bridge and down Strand on the Green to The City Barge, where Matty boy and his Chiswick agency mates were having their Christmas do. I'd only worked five hours for them this year, but was bought beers and fed, which was nice. They had just finished a hotly-contested quiz just before I arrived. Apparently it had featured lines from a poem of mine, and some by Lucy Silver, who is working with Matt now, and is a young promising poet in her twenties. Also Steve said he had used a slide I had presented to them years ago in a presentation today, which had gone down well. I seem to be in the agency somehow, without quite being there, which is lovely. I enjoyed chatting to everyone, particularly Matt, Jo (who remembered dancing wildly with Lorraine at Matt's wedding) and Lucy and Matt's pal Brendan too.

I walked off to Kew Bridge station with Judith, who is Pat's wife (these agencies are very incestuous) and we trained off to Charing Cross together, and I caught a train to Brighton. The thing was jam packed with standing room only. I was bursting for a pee when I got on, and had to travel all the way to Brighton without being able to get to the toilet. At last at the station, and they had closed the sodding Station toilets too. A cross-legged cab home. Very happy to be home. Went to bed and talked talkatively to Lorraine. 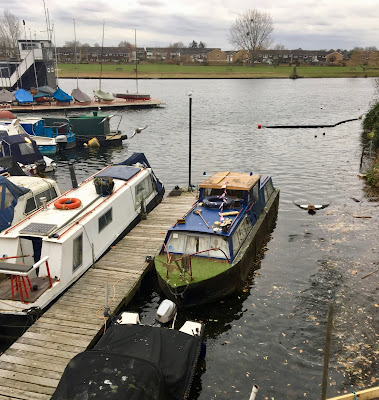