December 26, 2017
A slower start this morning, although we were Face Timed in bed, by Beth who wanted us to get up. Sam and Jade and Sian staying over at Beth's flat.

After breakfast,  I walked up to the local co-op at Fiveways to buy some milk and a newspaper for Pat, drizzly when I left, it cleared up in minutes and on my way home, I paused to saunter for a while in Blaker's Park. The bright low sunshine, and fresh air blowing uphill from the sea gave me one of those fleeting, difficult to describe moments of utter happiness. Home saying that it was a glorious day, and after an hour or so Lorraine, Maureen, Pat and I got into the car and drove off to Hove, where we got out for a walk.

This walk less well-starred. The sea was an angry khaki and cold stinging rain began as we got out of the car, just as Lorraine was dropping her iPhone and smashing its screen. At the seafront by the huts we came across a dog with a square head, menacing a boy with his father fending it off. It then ran over to growl at me. Which pushed Lorraine's child-protecting buttons, and she made the owner, a 'but he's a good boy' kind of woman, come and fetch the nasty creature.

We met Jade and Sian walking along, and I had a good chat with Jade, and learned more about the aesthetics course she will be teaching. We cut short our walk as the weather was shocking. At the end of it I managed to breathe in a piece of the tissue as I was dabbing my nose, which lodged in the back of my throat and caused a brief but alarming choking fit.

We assimilated Sian, and drove home to hot teas. Jade and Sam soon came round in an Uber. Sam with a gangster's voice, having a wretched sore throat. Jade, much better from her bronchitis. Winter's gifts. Lorraine sore throated and coughing a bit. My throat still going strong, but I felt a bit more lively today than I have been feeling.

We all had an enormous pile of bubble and squeak with cold meats (except for the vegans) and pickles, and washed it down with a nice beer.

I phoned mum, and she and Mas had a good Christmas day with some of their London pals, and didn't get back till really late. I was very pleased she had enjoyed Christmas.

In the evening we all played a giant game of Uno, Sian humorously revealing a competitive nature. This went on for some time, and was great fun. After this, Beth had remembered a game called Pig, which seemed to be a game that was more about noticing that other people had their fingers on their noses. But good fun too, although I was eliminated early.

A cheery evening generally. Pat and Maureen watching Death in Paradise, and soaking up the sunshine. I focused on soaking up some wine and cheese. Lorraine and I last standing, then upstairs to sleep the sleep of the innocent.

Below a moment in Blaker's Park, and playing Pig, clockwise with Lorraine in her new Christmas jumper, Betty, Sam, Jade, and Sian. 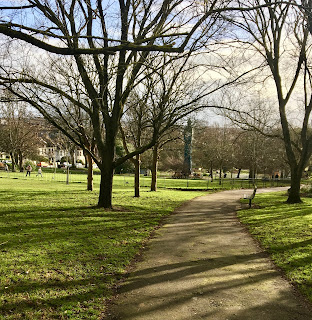 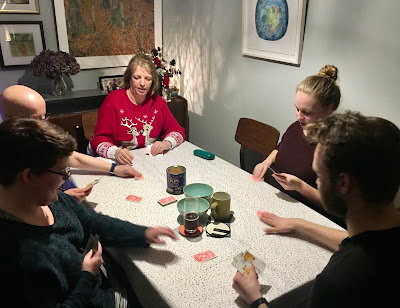