December 16, 2017
Calliope has been looking at me with one eye shut for the last day or so, and I took a look at it yesterday and it was sore and inflamed. She is prone to this. Phoned up for a vet's appointment which we had at 12.  Before this, Lorraine and I sprang up early for a weekend and drove back to Bolney, where we bought a non-shedding tree from the nursery there.

Home, and before we'd even taken the cat carrier out of the dungeon, Calliope, usually like a Phillip Pullman daemon, hanging around me most of the time, had hidden herself. We fished her out from under the futon, and I carried her into the car wrapped in a blanket. Drove there with her trembling and yowling, which gradually died down as she weaselled inside the jacket I was wearing. She is totally calm in the vets, due to all the pheromones I suppose.

Eye drops for the weasel then, and she is very good at having these put in.

Lorraine and I then off to do some shopping, food and pressies. Home to sprawl exhaustedly on the gold sofa before Lorraine opened the box marked Christmas and we began decorating our tree, and getting ready to go out again.

Off to Richard and Maria Grazia's house for the now traditional Richard's birthday/pre-Christmas party. Richard was playing some lovely Jazz standard tunes with Tom on bass. Enjoyed talking to Steve Cartwright as ever, and Silvana from the Shakespeare Heptet. 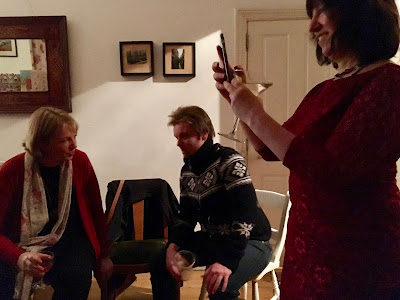 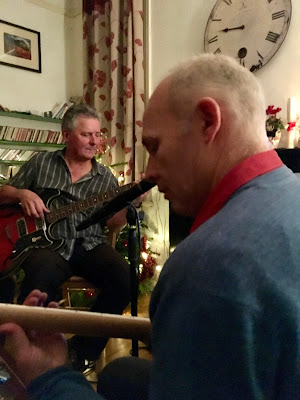