December 11, 2017
An unspeakable morning, with icy pouring rain. Much of the country covered in snow. Lorraine off to work, and after I sent a worky couple of emails I packed up my bag and headed off into the deluge. Outside my gate a man passed walking his dog, and said 'nasty weather' to me from under his hat, and he was right.

Walked down to Preston Park. A South African businessman based in Australia started talking to me as we peered out at the rain that had some snow in it, but he soon began to enlarge on foreigners, the dangers of being 'overrun' and the glories of Brexit, I made my excuses and legged off to faux first when the train came.  Up to Paddington, where the rain was slushy. Into the Paddington offices, and dropped off the laptop they had lent me, and received a handshake from now recovered Daniel, and hug from my pal from other agencies, Yas, who was there and just about to go to Sri Lanka today, and from Harriet one of the team I had been away with in Austria. From Paddington, two stops to Baker Street where I found Bob standing outside The Globe pub, in a big waterproof coat and a stern face.

We hurried down Baker street, into Caffe Nero for coffee. Then, next door to somewhere that sold baguettes, bought two of these, and walked and ate in the thick slushy snow. Mooched southwards, crossed Oxford Street and went towards Leicester Square. Near there we stopped at a pub to dry out and warm up a bit, and drink a refreshing beer. But the beer we chose was called Whitstable something or other, and it tasted of petrol. From there sauntered towards Leicester Square. I took a photo of Bob in the street as the precipitation had stopped for a bit, and I said, 'You look fabulous', as I snapped the notoriously hard to capture on film Bob. A young slim black girl walked past, and turned around and said, "Thank you" to me. It was all a bit awkward, but I felt I didn't want tell her that I was talking about Bob and not her, as she seemed so pleased.

Great to chat to Bob all day, on what has become a bit of a traditional pre-Christmas booze, and discuss the many and various things that needed discussing. From there to the Salisbury, which was very cold inside but served beer. We sat near the door, and I could see my breath. I was gaping like a goldfish as the manageress happened to glance at me. Bob and I had a cheeky beer in there, and then went to The National Portrait Gallery, to see Cézanne Portraits.  While an interesting exhibition, neither Bob or I liked the portraits much, and we had great fun finding ways of picking them apart and denouncing them afterwards, so enthusiastically that we got lost walking towards the Seven Stars on Carey Street. Here Bob gave me a bottle of Bruadar, an interesting-looking malt whisky liqueur.

Eventually we hailed a grumpy taxi driver, who took us there. A couple of cheeky beers there, and then we walked to Ye Olde Cheshire Cheese, but our favourite room was by then full of interlopers so we went downstairs for a pint of porter that tasted of vanilla and chocolate (Bob) or toffee (me). Then we crossed Fleet Street to have a beer in The Punch where the bar staff were drunk, and finally made off to the Bengal Tiger for a fairly decent curry. As we were near Blackfriars, I bade Bob a farewell from there. At Preston Park, I walked up the hill at home I found had done just shy of 20k paces, which is a good haul for the day. Crept coldly into bed and chat to Lorraine before sleep.

Below the deluge snapped this morning walking to the station, the interior of the Salisbury, one of my favourite pubs, and Bob looking fabulous. 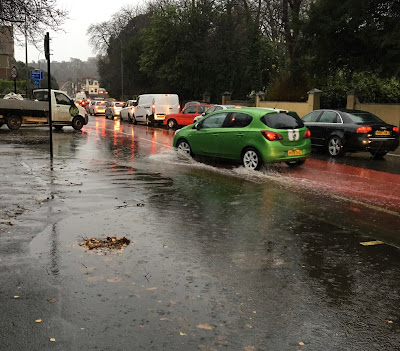 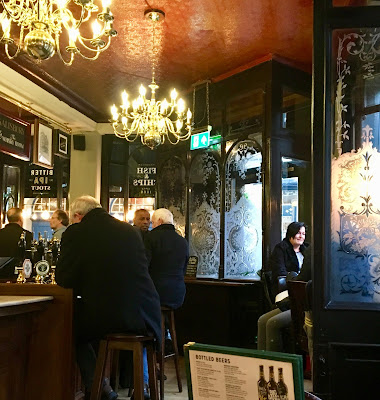 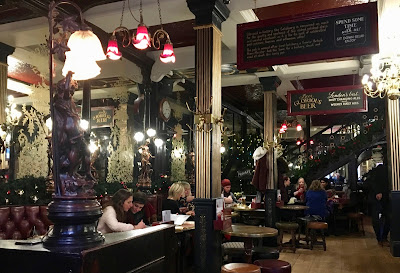 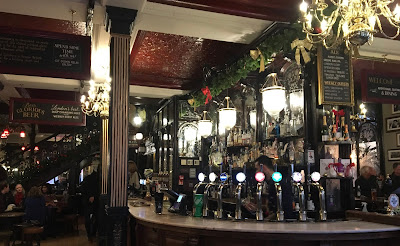 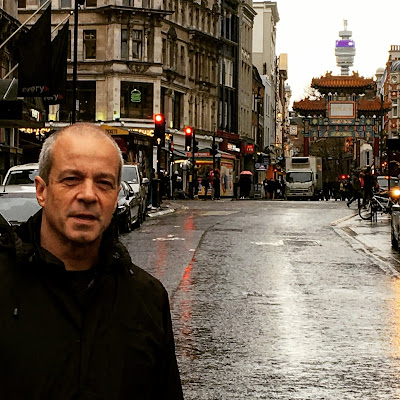