Heavy rain showers this morning. The gutters running like brooks, and fallen leaves making miniature beaver dams as I slipped off to buy some chewy brown, and then up to Raven's Bakery where I bought eccles cakes and pain aux raisins as Adele and Patrick popped around for coffee this morning as they were in Brighton. Nice to chat. Patrick going to start an MA in songwriting and production in January, which is great. He writes lots of songs. Adele's stained glass windows going well too.

Later Anton called around, armed with Polish beers and his excellent cheesecake,  and played an epic game of Twilight Struggle, which is a board game to do with the cold war. It is complicated and takes a long time to learn. Sam picked it up rapidly, however, and soon they began a game that lasted for hours. Anton at last able to play what he thinks is the best board game what delighted. Sam likes games in general, and was happy too. A win all round, as complex board games give me a nosebleed.

I called Mum for a chat, and later collected curries from Red Chillies. Otherwise Lorraine steadily worked on the farm in Star Dew Valley, had some work stuff to sort out too.  I worked on a poem.

Chelsea stretching their lead at the top of the league, as nearest rivals Liverpool drew at home to Brighton, and Manchester City lost to Crystal Palace. Quite absorbed by all the reports of the games, and watched Match of the Day with enthusiasm this evening.

The top of Osborne Road when it wasn't raining for a few minutes. 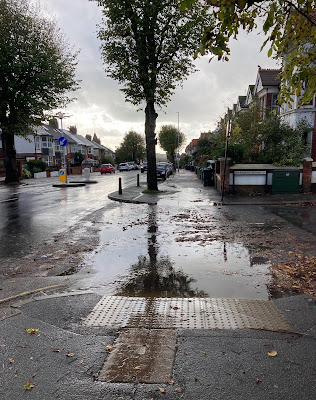