From a nadir to nice times

Felt at an absolute nadir this morning, feeling overloaded, out of control, and with nothing but difficult conversations and stress ahead of me. Meetings for the current job, which is being run out of New York, being posted to me to fill the weekend, meaning that this week, which started with a migraine, would  stretch for ten unbroken days. I decided I whatever they said, I was going to take a day off. Luckily during the day lovely Fernanda negotiated Saturday off for the London team, a fact which made me feel a good deal better about things.

Spoke to Keith first thing too as we have been offered work as a team starting Monday which I can't take. Worried that I would lose Keith three weeks work, but luckily that agency found him another writer. My old pal Slug emailed asking about my availability too but was similarly unable to do that either.  However, the way things are working out, I am unbooked from next Thursday -- and will have time off in my birthday week. I am absolutely burnt out, and need for my own sanity to focus on some of my own work.

Heard from Robin today, and she hadn't had the best of weeks either.

The day ended with a two and a half hour meeting, having to sit through teams presenting from around the world before Nanda and I could present. The overall creative, a woman who was originally English, based in New York, abrupt to the point of rudeness, was okay. Our work is liked, however, which makes it easier.

Finally escaped and went to the pub shortly before seven. To meet Lorraine, Sam, Betty and James in the Cleveland having excellent burgers and beers, near an outdoor heater. A cheery evening, most of us sorely in need of an evening off. James and Betty's home buying still progressing, but it is a stressful experience. A scuffle in the street, out of our sight, people drinking at a wake since lunchtime let emotions run away with them. The landlord, who had been a model of hospitality earlier finding us a table in the crowded place, even apologised to us afterwards for the fact of the scuffle.

Fond farewells, and Lorraine and I toddled home leaving the others to a few nightcaps.

Below James, Betty and Sam. 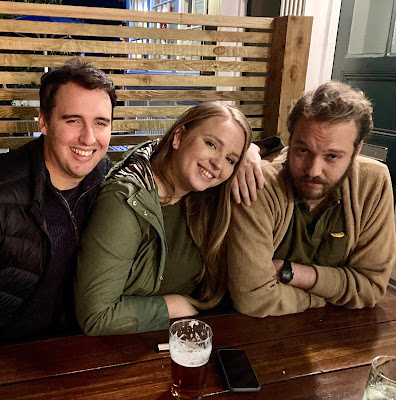