Farewell to the Old Church Hall

October 31, 2014
Now in Haywards Heath, in a particularly pleasant and leafy former council estate. A minute’s walk away across a little open ground is a fenced path that runs along the side of a field of neat allotments. Few people on the streets, and an edge of town feeling. Looking from my desk across the leafy estate to a tree-lined horizon. It is now Friday morning, the morning of Halloween, and for the first time in a week I have a moment to catch up.

Last Sunday was our wedding anniversary, which we spent packing. And on Monday, we packed in earnest. We recaptured Brian who has been acting weirdly over the last few months, when he returned ungratefully for food before disappearing for the rest of the day. Surprisingly Brian quickly resigned himself to his fate and began to be more like himself again, and once the cat flap was replaced with the original glass sheet in the front door there was nothing for them to do other than stare out like prisoners. John helped us pack for half a day on Monday, melting back into Brighton with a fistful of brownie points.

Lorraine and I broke off on Monday night as it was Dawn’s birthday, and we drove to her parent’s house in Henfield, having nabbed Rosie en route, and had a jolly evening with Dawn, plus her pals Denise, Mark and Jane. Really tired, I cleverly mixed beer, bubbly and port and felt execrable the next morning. Rather than haranguing me for my rubbishness, my lovely wife brought me tea in bed shortly after six on Tuesday morning. Curiously the relentless work, box carrying, furniture wrangling, etc. enforced a 'manning up'.

The removal guys, called Ark Removals, were really pleasant, hard working, cheery, and actively reduced the stress. The first day’s stuff off to The Big Box company on the edge of town, where they sell storage by the square foot of floor space. We had not bargained on the fact that the ceiling only just cleared my head. Lorraine briefly went into Godzilla mode over this weasel trick, and we were soon promised extra room for free if it did not all fit.

While the Ark men were unloading Lorraine and I had a bacon and egg sandwich in a nearby cafe. Bacon and egg sandwiches seem de rigueur when you are about the business of moving. Returned, and it had all just about fit. Home again, and the evening regrouping and organising the cats and skeletons move to Hayward’s Heath. More packing, and then up to the Signalman for some food, washed down with a judicious beer. To bed, feeling utterly exhausted.

Wednesday up at six again, and did it all again. The men from Ark loaded up in a couple of hours, and a frenzy of vacuuming, and last things, and Lorraine and I levering up the covers of the water meters in the rain and taking smartphone shots of them. Raining steadily now. Lorraine on the phone to solicitors, the house sale went through, and as Lorraine was doing this one last turn around the empty house, seeming enormous and echoey, and I closed the door on three years of my life and four of Lorraine’s, poking the keys through the letter flap of the Old Church Hall with barely a second thought.

Off in the car loaded to bursting with fragile computer stuff, the TV and various precious things and Calliope and Brian squished miserably into the cat carrier. After the initial hissing had abated, they settled down to a steady yowling. The car caught in crawling traffic jam to Haywards Heath just to ensure we gleaned the most from this experience. Once into their new home, however, we subjected our feline companions to three Feliway pheromone plug ins, which has left them malleable, saucer eyed and wanting to listen to early Pink Floyd.

The Ark guys turned up on time, delivered everything and were generally fantastic, then after lying down for half an hour trying and failing to sleep, we set to again. I meanwhile received a particularly idiotic rejection for my marketing book, and someone enquired about my availability for work next week, and then when I replied saying I was available, I heard no more. Lorraine and I then in a frenzy of unpacking, organising our new little home. We don’t know how long we are going to be here, so we are making ourselves comfortable.

I've had quick chats with Mum, and First Matie and Janet since we’ve arrived. Watched a few episodes of Frazier before slinking off for an early night. Thursday spent getting the place straight. Lorraine and I still very tired and I found myself doing stupid things like spilling my lunchtime baked potato and tuna onto the gold sofa or slicing my thumb with a knife.

Went for a walkabout on Thursday afternoon, to the main high street which is about 25 minutes away. Haywards Heath is pleasant and we intend to treat this as a short holiday break (with work and stuff thrown in). Home again, and after we cooked and had a couple of glasses of wine (drink seems necessary), watched a few episodes of Frazier and then went to bed before 10, feeling wiped out. Despite this both of us absolutely delighted to have moved onto the next stage, and now a whole raft of complications has fallen away leaving only one thing left to negotiate, which is when we move into the new place in Brighton. Meanwhile we have no broadband in Haywards Heath till next week, so now off to find a cafe.

Below some snaps from Dawn's birthday beano. Mark and Denise; Jane and Rosie; me and Mark; Lorraine and moi; Rosie and Dawn; Lorraine and I in the back of the removal van; an emptying Old Church Hall. 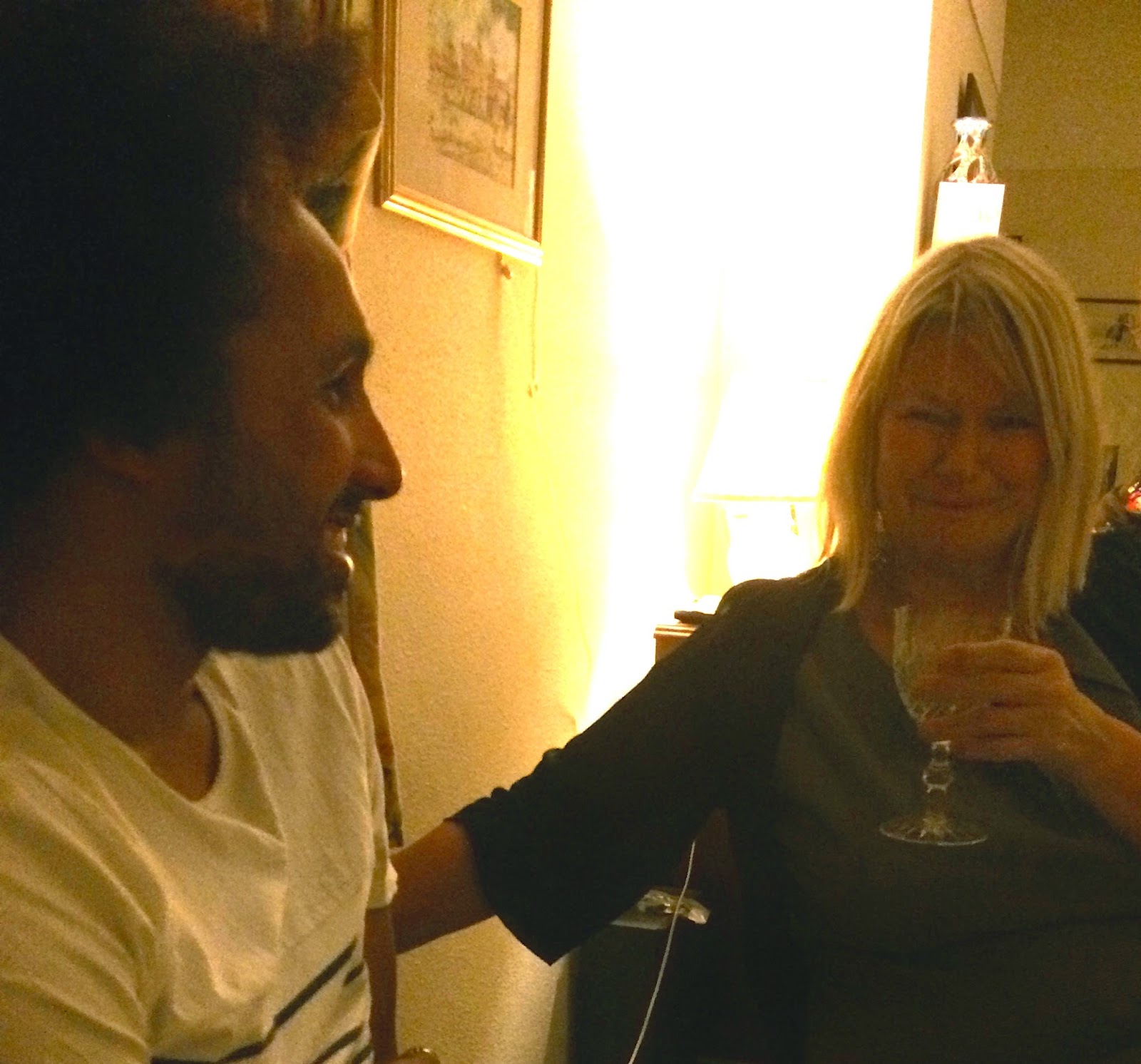 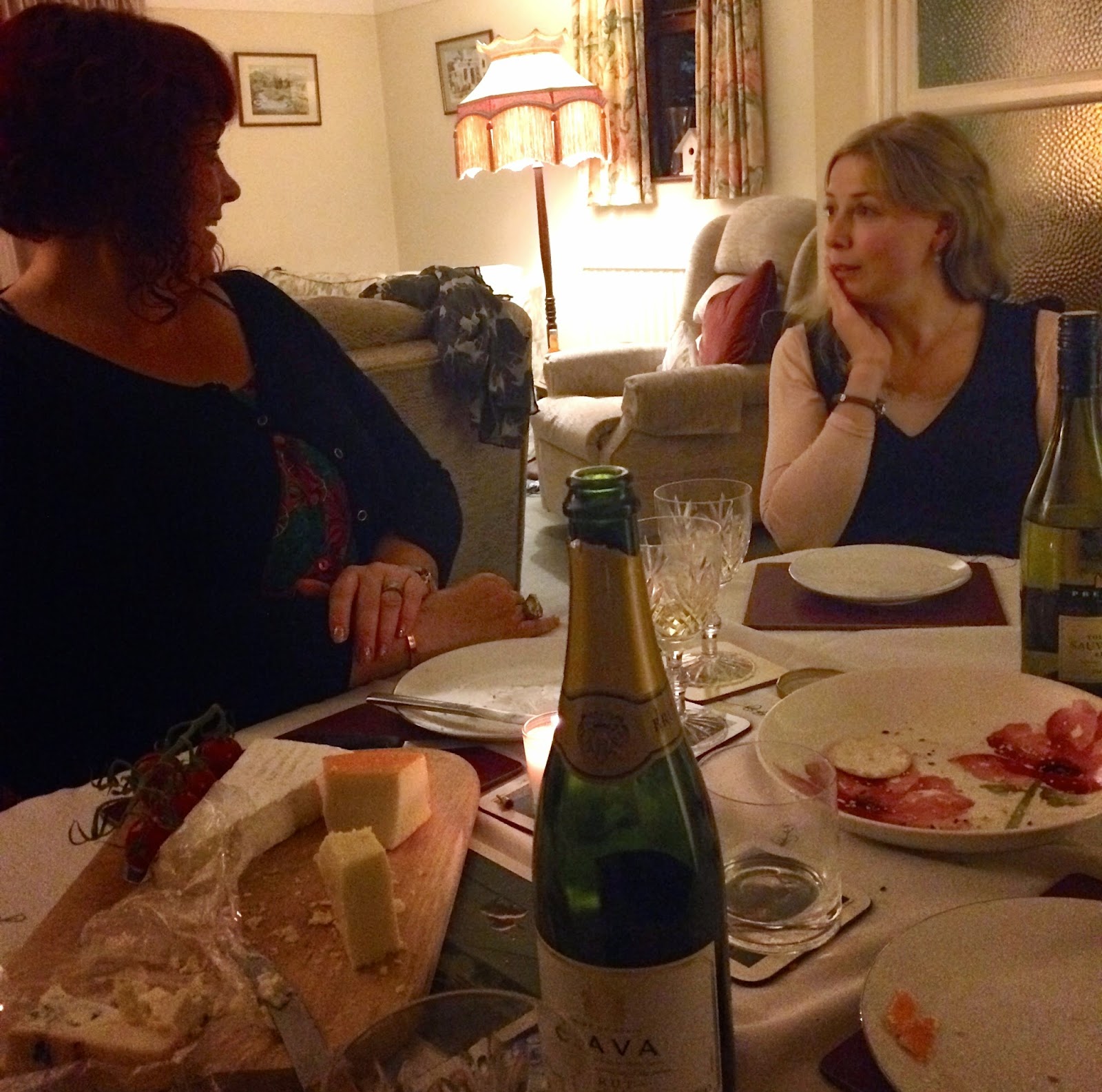 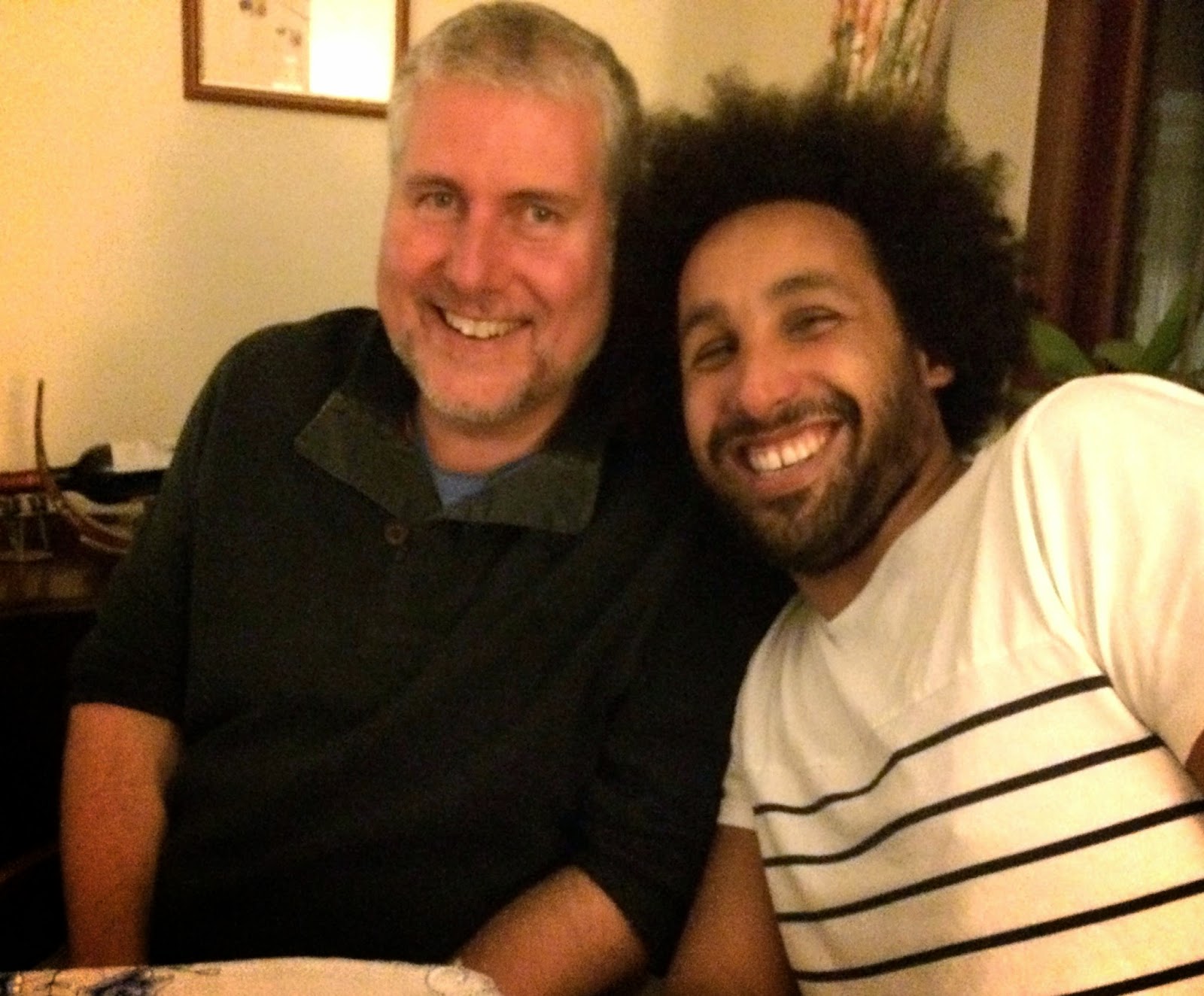 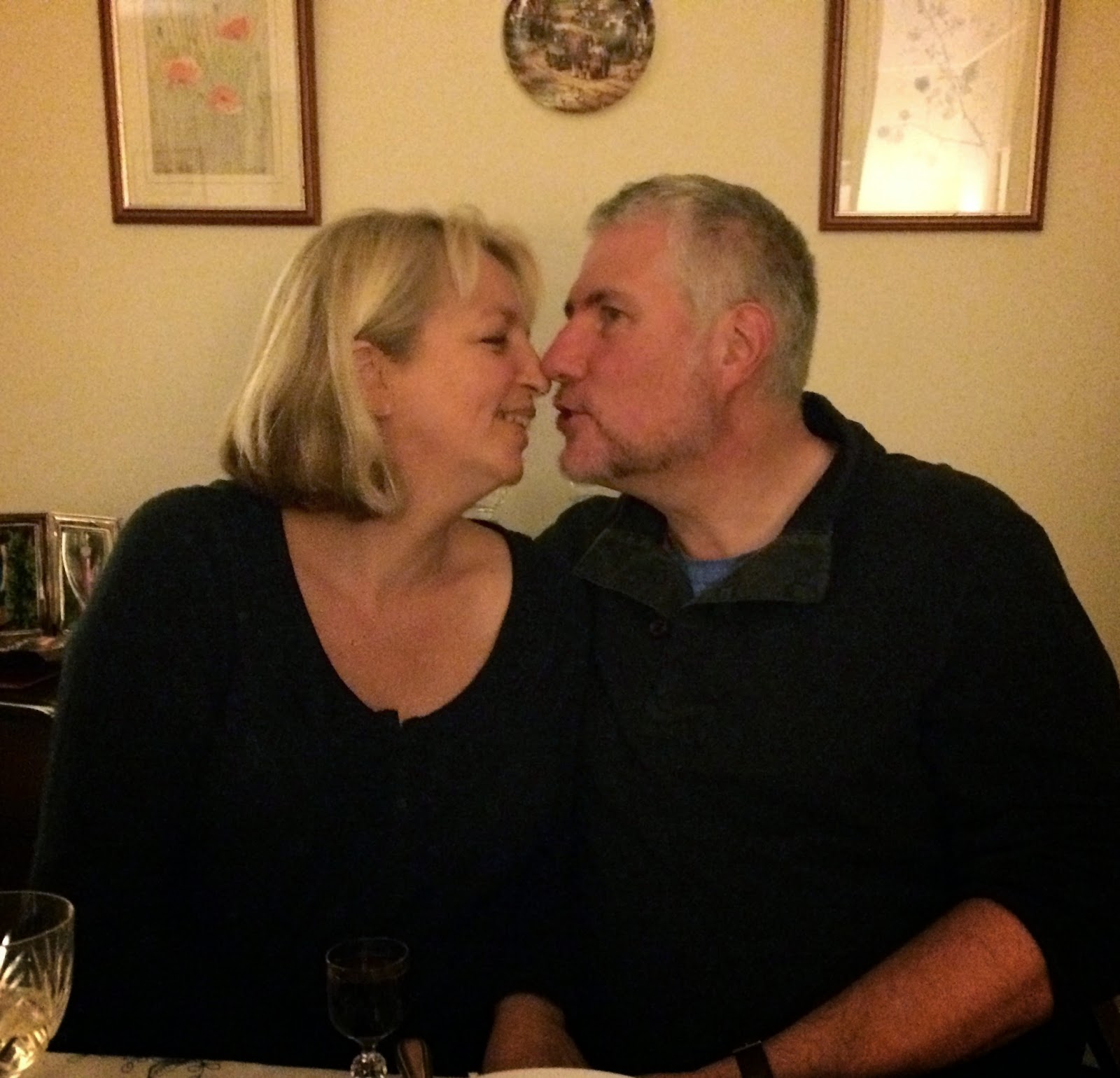 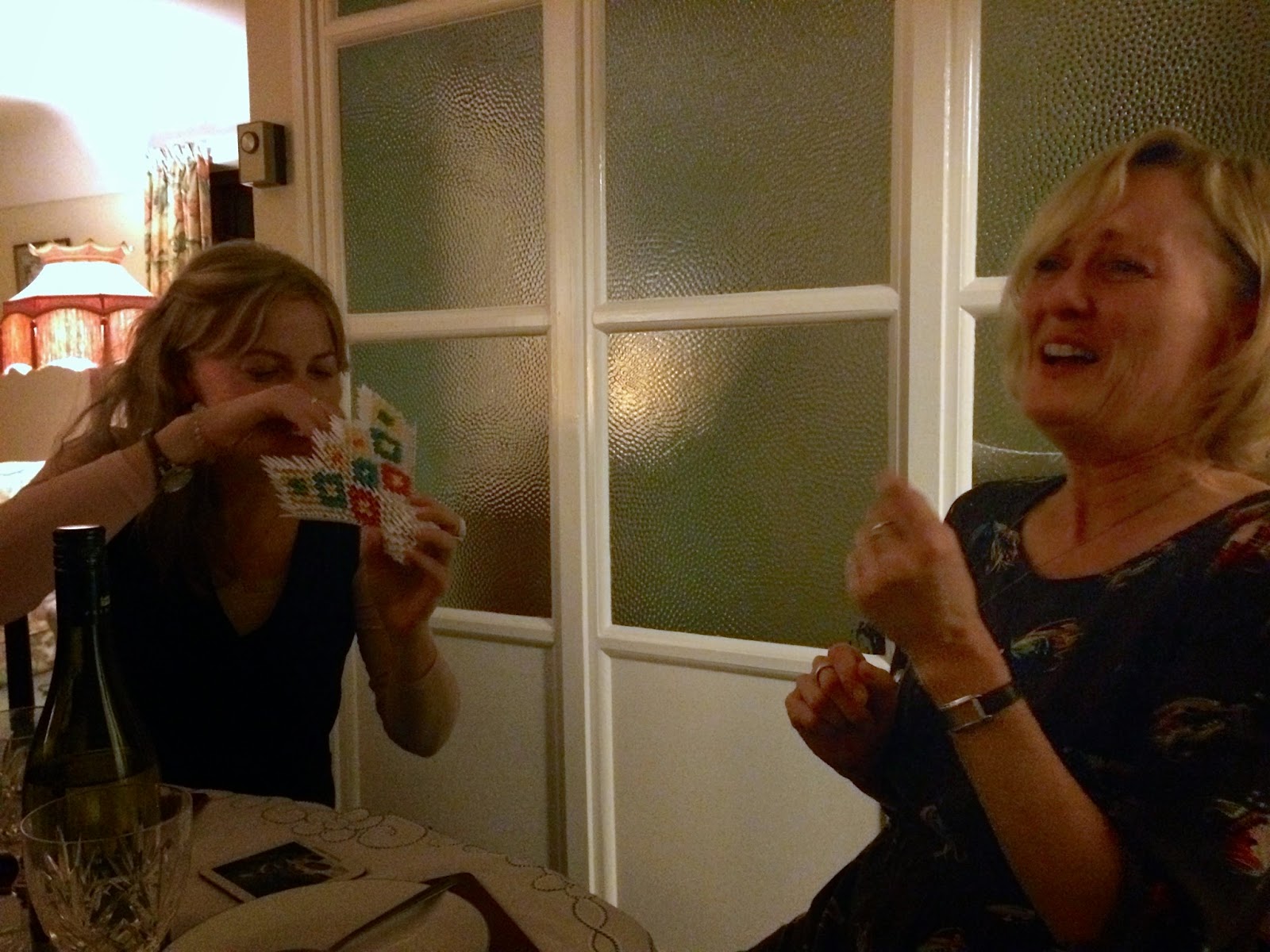 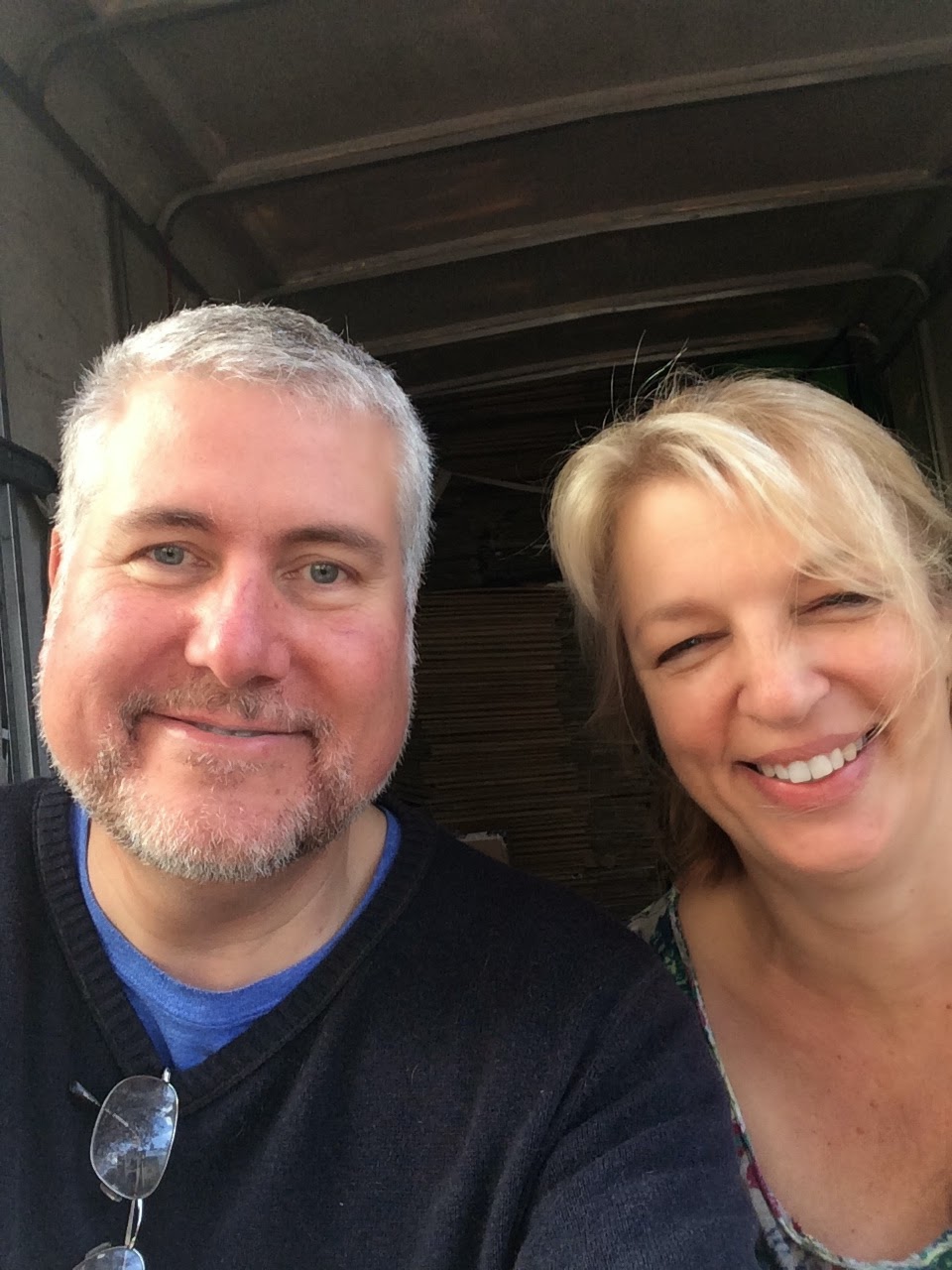 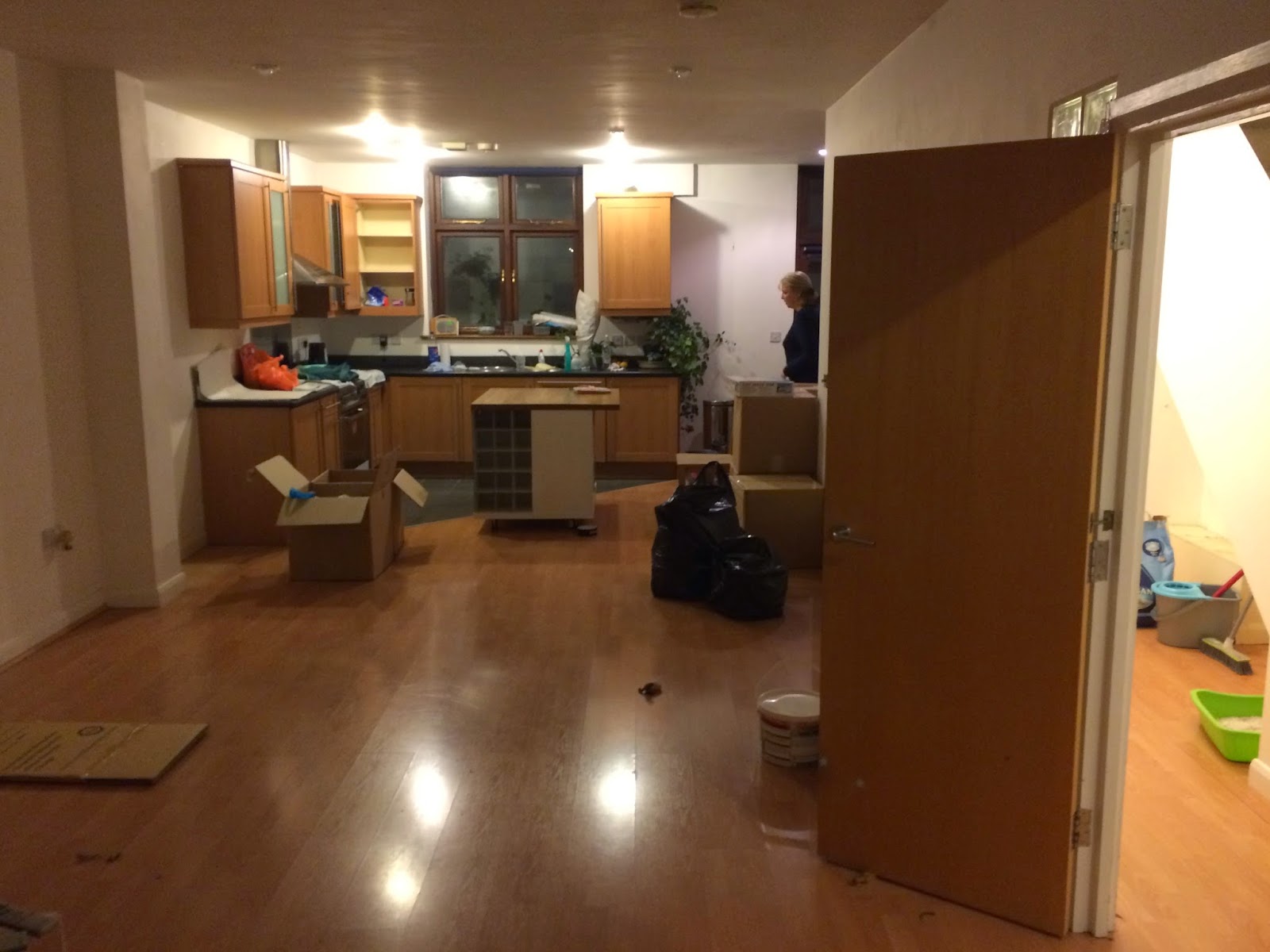