An interlude with Mum and Mas

Up early for a Saturday, and off to meet Mum and Mas at the Waggon and Horses. Left in loads of time, but the traffic came to a standstill several times on the M25. It took us almost three hours to get there. I had called Mum beforehand saying we would be late, but they left early, and so had been waiting for us there for an hour and a half.

Good to see them however. They had been picking at a bit of food and having a slow drink. We all had lunch, Lorraine drinking lots of coke and coffee to keep awake for the return leg. All very friendly there still. Something wrong with the beer however, and I ordered a pint of Guinness I had to return. It was replaced by a slightly luke warm lager. Something wrong with the temperature of their taps.

Mason talking to one of the young guys there with beefy arms, about Arnold Schwarzenegger and passed on a bit of Arnie's bodybuilding advice. Lorraine and I ate chips and chicken wings, which were quite nice. When it was time to go, Mum joking with the chef there, who I think is from the middle east, who calls her and Mas, Mum and Dad. Mum offered to swap cars with him, which he laughed at saying he couldn't afford to as Mum's was obviously an antique.

Felt a bit bad about zooming off after only a couple of hours there. But Mas was looking tired, and it had been a monstrous journey there so we didn't go back to Edgware before starting the long haul back. As it happened the journey home was much better, and we arrived home in just over half the time it took us to get there.

A relaxed evening at home. A bit of a Frasier festival with Jade.

Here is an impish snap of Mum I took in the pub. 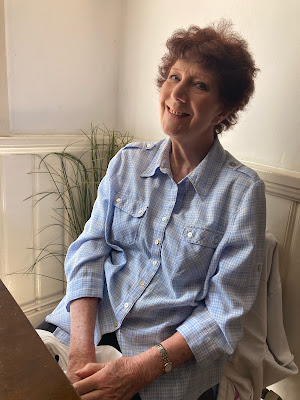 Mas Mum The Waggon and Horses