An interlude of cousinly fun

Up and packing for our last morning with Sue and John. Little Monty cheerful and full of beans this morning. Felt sorry to be saying goodbye to them. Staying with them had made us both feel much more relaxed than we had been. Loaded up the car, and made our fond farewells.

Then we drove off, pausing at the Wye Valley Brewery John had told us about, and given us sample drinks from where we judiciously paused and bought twelve beers to take away. We chose Butty Bach, HPA, Wholesome Stout, and Glorious IPA. and the Hopfather. Stashed a box of these in the boot. Then pausing only to buy a gift, made our way to see Maxine and Simon for lunch in their garden, joined by their sixteen year old twins Amelia and Taylor. Simon had kindly prepared an amazing lunch, including pulled lamb to make into wee little kebabs, quiche, lovely greek salads and so on, plus Eton mess, and lemon tart and cake. It was an amazing feed. Lovely to see them again, almost a year to the day that we dropped in on them last year. I like Maxine very much, and she was very warm to Lorraine as her cousin.  She was talking about family matters, and investigating if there was any Italian in the family, as her and Lorraine's grandfather may have been Italian and adopted.  Amelia thinking of studying philosophy and psychology, and full of ideas she mentioned astrology, and I asked her about her chart, at which point Taylor and Simon got up with comedy timing and left. Later she showed Lorraine and I her bedroom, which was almost like an art installation, with pictures and poems and tarot decks and foliage trailing down from little lights on the ceiling. A lovely interlude, seeing them, just as last year.

Then we drove, very full, off to Monmouth. We found the bed and breakfast, run by winners of a TV show called Four in a Bed. Our room is tiny, and to our surprise had no window, other than a velux one in the roof. It is exceedingly clean and interestingly decorated, and is called the Owl's Roost. 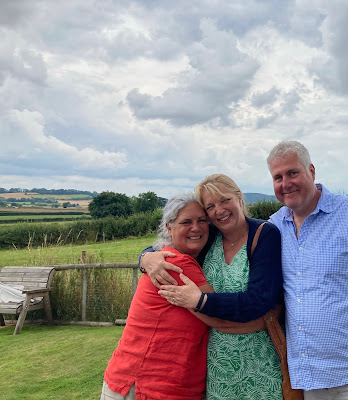 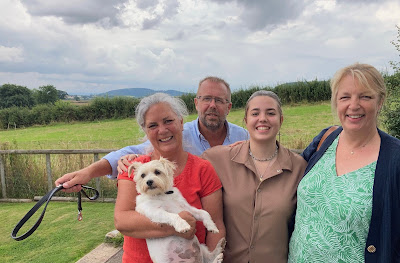 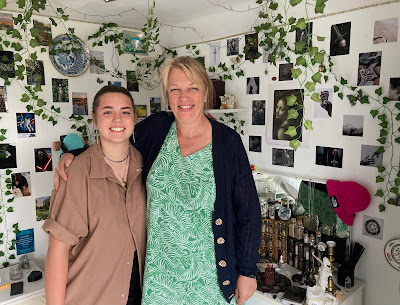