Another automatic text from the bank first thing, saying another attempt to draw a cheque from my business account was being made. All I can do at the moment is await the complaint investigators getting back to me. But it still puts me off my stroke. Later, paid the plumber from my personal account, but in checking his invoice afterwards found he had changed his account details. Do'h. Feelings of inadequacy  compounded this evening, when I added three times too much Thai paste to the grub I was cooking.

Keith got in touch. He has been fairly quiet over the last few weeks too, we are going to make some plans. I contacted Val, to confirm all was well with the work I had sent her, and she asked if I had got the email she sent me yesterday. I hadn't, which is making me wonder if my email is still up the swanee.

I wrote for a few hours first thing, but was feeling antsy. Went for a walk at lunchtime.

Meanwhile Jade has been doing hot yoga and said she met a woman who talks to animals as a kind of animal therapist, she told Jade that therapy animals she has spoken to -- particularly horses -- resent having human psychological problems dumped on them. Peak Brighton.

We all ate my mis-cooked Thai-style king prawn curry with noodles outside. It was a beautiful evening.

I have some memory of trapping my hand when moving stuff around in gardens over the last few days, and this morning, I poked a bit in my palm which felt tender, and it went on to exhibit bruising and swelling. Lorraine said it would have to be amputated, and Jade said I would be like the Winter Warrior in the Marvel Universe.

For the second night in a row, Lorraine, Jade and I watched a Marvel movie. This one was called Captain America: Civil War, and went on a bit, but there was plenty of biffing and the dialogue is often funny. Jade's considered analysis is that Captain America is in love with the Winter Warrior.

I took this snap of a beetle on a fern outside. Nice colours eh? 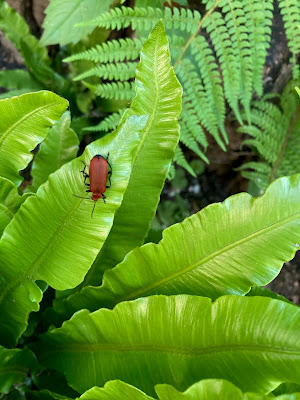