A bit of a dip

Up fairly early for us on a Sunday. A leisurely breakfast (tomatoes and a piece of bacon on chewy brown toast as you asked). I called Mum and arranged to see her next week, and we made plans for a picnic on the beach later on. However, there was some call to do with the school, and some of the children had been exposed in a club outside school to people with confirmed tests, which plunged Lorraine into a series of phone calls and emailing parents and so on.

While Lorraine was doing this, Jade and I watched the England game where they managed to beat Croatia one nil. The goal scored by Raheem Stirling, who had went to the school in Wembley I went to (decades later obviously) who revelled in scoring in his 'back garden'. The admirable Stirling was awarded an MBE this week too. More power to him.

Meanwhile Boris Johnson and his crew making himself and our country look idiotic at the G7 in Cornwall. His Brexity side-kick for the event, David Frost, was wearing union jack socks. Crippling the Economic future of the UK is just one big Public Schoolboy jape for these fuckwits.

In the late afternoon, Sam, Jade, Lorraine and I went off to the beach at Hove. It was the hottest day of the year, and after Lorraine had explained on the drive about cold water sending blood to your organs I gingerly edged, yelping and whining, into the sea. It was cold and I felt my rib cage seizing up and difficultly breathing. Jade came down too and got in with far less fuss. Later Sam, tore himself away from his book of crosswords, and simply walked straight down to the sea and dived into the water without flinching, a fact I was deeply impressed by. Dried off in the sun and ate a variety of vegetarian Higgidy pies, crunchy ice cream and lapped up two cans of beer.

Calliope my view first thing this morning, sunny beach, a photo Jade snapped of me, and the new moon pictured just after sundown today. 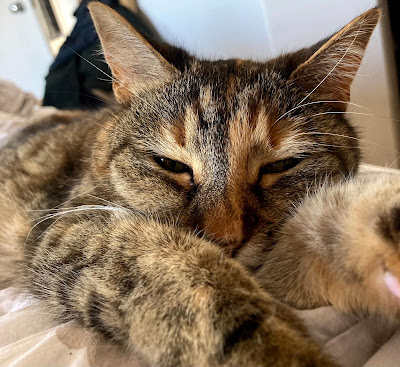 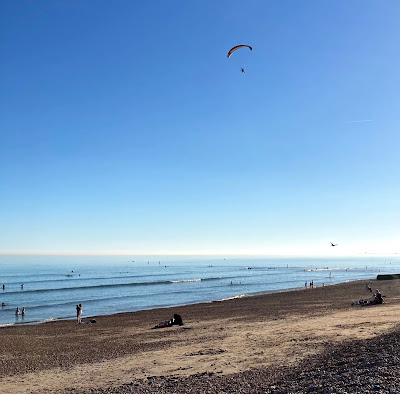 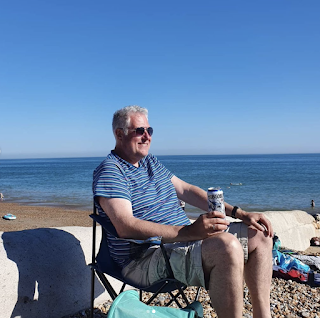 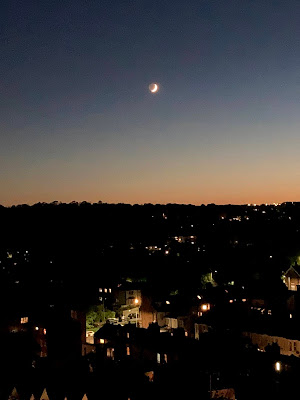