Gothic interlude this morning, with sea mist rolling up to this part of Brighton just as a partial lunar eclipse of the sun began. I had been feeling psychologically out of sorts all morning but this conjunction of heavenly bodies in Gemini proved a signal to get on with stuff (I had been tinkering with poems for the first few hours) and I began devouring an unappetising menu of frogs, filling in tax forms for my accountant, repaying the plumber, importing emails into my mailbox, trying not to get enraged by another text from the bank, setting up a poet interview with Rishi Dastidar and plotting with Keith about scaring up some more freelance work.

A toastie for lunch and I was called by Mum, whose musician friend Ronnie had died -- and she was understandably sad and fed up. If the stars align again I will go visit her again in the next week or so.

f this afternoon to have my hair cut, a big event post Covid. Stacey is such a perfectionist. When the place was buzzing with four or five barbers, you could expect your hair to take around 15 mins to cut, and come away with a decent cut. But Stacey, if he has the time, will lovingly perfect his work for 40 mins, shearing an ear hair here, and worrying at a stray strand there and scissoring things that to the untrained eye strongly resemble air.

I emerged feeling as if I had the best haircut in Brighton. Odd really, for the master wears his own curly   but thinning hair long and unruly. Perhaps no one else can be trusted to cut it as well as he knows it should be cut.

After this a bit of wandering in town, and I called Anton on spec, and we went to the Batty for a beer in the back garden, my first glass of anything since struggling down a small wine with Pat and Maureen at Sunday lunch. Actually rather nice just to take your place, and staff bringing your beer and where you sit. Anton showed me an excellent belt he had bought from a craftsman in Cornwall. I have to say I was tempted as most of my belts no longer fit me, all being I am pleased to say, too big.

Lorraine out seeing her pal Lynne and others tonight, so Sam and Jade looked after themselves, and I picked up a cheeky red chillies curry for my dinner. Home and Sam and Jade were watching TV, and I hung out with them for a bit, before Lorraine came home.  A day that got steadily better. 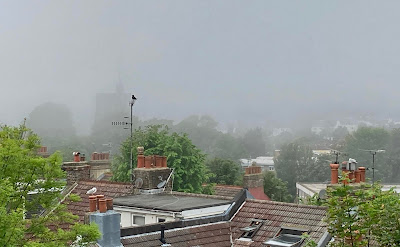