February 18, 2022
Storm Eunice today. Lorraine zoomed off to work early, and then closed the school. A rare red weather warning for the south of England. Really was very windy. On the top floor the water in the bowl of the toilet in our little en suite slopping about merrily. I went out for a very short walk armed with my camera. A big tree had blown down on Cleveland Road, which is on the edge of the Blaker's Park but it was all tidied away by the time I got there. Other than lots of broken branches strewn about, and rubbish bins blown over there was not much to see. Certainly blew the cobwebs out though.
Lorraine working from home again, having had a meeting and closed the school. I finished reading The Memory Illusion, did some writing and am now well into Metaphors of Memory by Douwe Draaisma.  Also finished reading what Gilbert Ryle had to say about it. Nothing remotely interesting to me. Sometimes I wonder if philosophers in the Anglo American analytical tradition deliberately fillet out anything of interest. It is because they distrust metaphor.
Also, along with thousands of others went to YouTube to watch Big Jet TV, which is a bloke standing on the top of his van, excitably filming jets landing at Heathrow. Lots of the aircraft bobbing about and sheering in crosswinds, and one or two having several attempts at landing. Naturally Anton was watching it too. He said he'd love to be on one of those planes. I would rather stick needles in my eyes.
Fascinating stuff. Galen, a Greek philosopher and surgeon, working for the Romans, said that memories were stored in a sort of chamber in the back of your brain. This belief persisted for around 15 centuries, and it it's why we say things like 'it's in the back of my mind'.
Slipped out to collect a curry. Lorraine leaving curry plates for Sam in his doorway. It is reminding me of Gregor Samsa in Kafka's Metamorphosis. Sam, through the medium of long distance conversations, doing okay.
Below: wild excitement! Some bins blown down, and a lively looking sea in the distance shot from Bakers Park. 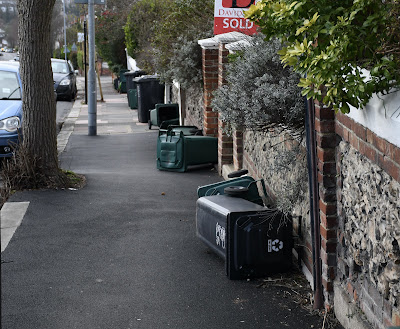 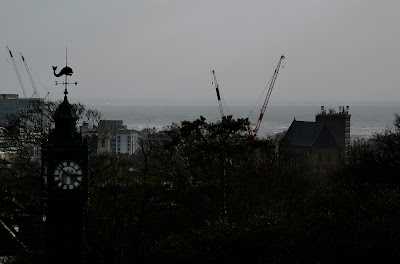