Scruff of its neck

February 23, 2022
Lorraine and I got hold of the day by the scruff of its neck and sorted out the front garden, which although only small, needed a fair bit bush trimming. We had dragged out the trug there too, and this we emptied. Then we took the car off for its MOT underneath the viaduct, and had lunch at The Signalman, one of our locals when we lived in the Old Church Hall. Enjoyed going for a beer, albeit a solitary beer, with my missus. A tasty chicken burger and a cheery barmaid. Then collected the car, which passed its MOT, and organised some storage for the general house declutter we are planning.
Home, and working on poems for a bit, and eating a sandwich supper. Watched The Rocky Horror Picture Show film, which I had never seen. I did of course see the original Royal Court Theatre cast performing it as a young teenager. My school, being an inner city sort of place, had mysteriously good arts connections, and so a bunch of us were taken on some kind of school trip to see it. I think I was about 13 or 14. I don't remember any of us kids being phased by its sauciness. A couple of the scenes jogged my memory of the show.
Sam still testing positive, although the second line is now so faint as to be hardly seeable.
In other news Beth's first night playing Bull went well apparently. She was a bit nervous not having done any stage work for quite some time. 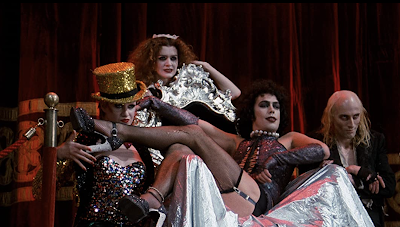 The Rocky Horror Show The Signalman