Rolling up to the Waggon

A good night's sleep. Off to meet Mum and Mas in Elstree at high noon. Packed my bag, and caught the train. Settled into faux first and worked on poems for a bit, and tinkered with a short story. Quite enjoyed working this way as the countryside slipped by and turned into London. A change at St Pancras, and stayed on the same platform off to Elstree and Borehamwood. The Borehamwood football team, is called Boreham Wood FC and are in the fifth tier of English football. Wikipedia says that Boredom Wood FC have a strong local rivalry with St Albans City. Anyhow, rather amazingly, they are now through to the fifth round of the FA Cup and are playing Everton in their next match.

I mooched down to The Waggon and Horses, and was let in just after 12 and was enjoying a pint of Guinness on their favoured table by the fire when Mum and Mas arrived. Mason said he had been watching a TV programme about modern sniping. He was a sniper in the Korean War so had more than a passing interest in it. He had also eaten several pieces of pizza this morning, and so didn't fancy a main course. Mum enjoyed a pint of cider, and listening to a group of tree surgeons on the next table, one of whom I recognised from my last visit there. He was the boss and said one of the other guys looked like a squirrel, which Mum enjoyed, and a bit later the Squirrel man did an impression of a grey squirrel for her. Lots of unreformed banter among them... The boss pointing to the youngest one, 'he's not gay but his boyfriend is' and so on.

Mum told me she was called Winky by her godmother's family because she could only open one eye at a time when a baby.

Surplus chips and peas collected for the birds, from the fish and chips we had, a fond farewell with Mum and Mas made off and I sauntered back to the train station, and had a straightforward journey, settling into faux first at St Pancras. Sorted out some work for next week en route. The train only went to Brighton, so I walked home from there before five. Lorraine back soon, and I toddled around the corner to pick up a curry, and both Lorraine and I happy to be at home and no early start tomorrow.

Forgot to take any pictures again... I am out of practice. However having nothing to do on St Pancras station again, I snapped these, including my train to Brighton nosing in to the station. Not too crowded. 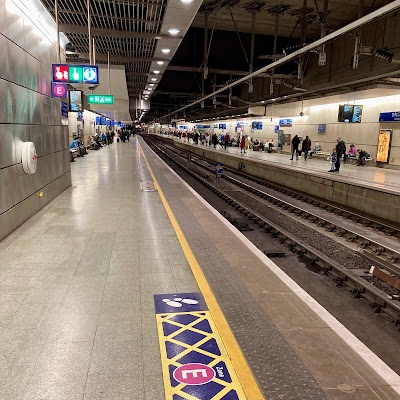 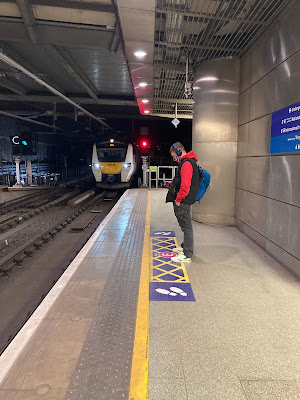