Another great couple of hours working on poetry first thing. Poetry of some sort is flowing out of me at the moment. It may all be rubbish of course, but you never know. Lorraine working at home this morning till eleven thirty.

After about ten I worked on my accounts, and by the end of the day I had got everything ready to send off to the accountant. Otherwise the podcast domain name still not mapping. New bank account still not showing up, although I have now received a bank card. The quality of the time is that if something simple can move at snails pace it will.

Betty called me sat in her car waiting to pick  up Tilly from school but had been ambushed by a heavy nosebleed, which was a bit alarming. All well in the end.

Clem next door called me at lunchtime and came around and began fixing up the decking. This as great but it necessitated me having to shovel things in the garden, and move and carry stuff, and make tea and so on rather than carrying on with work.

Jade doing an important presentation of a paper this afternoon, which she got through well.

Robin uploaded the new podcast episode, and I let people know on facebook, and then made off down tot he seafront to have my second jab. This time very few people there, as I was doing it at the end of the day. The actual jab itself rather more agricultural than the first time, and drew blood. Two jabs made me think of former deputy leader of the Labour Party John Prescott, who was know in the press as Two Jags, as he had two cars. When getting into a street brawl and punching someone who was abusing him, he became known as Two Jabs.

Spoke to Mum while I was walking home.  Lorraine arrived a few mins after me. She cooked a lovely fish curry. Keen to get her to the end of the week.

A bad reaction to a mullet. 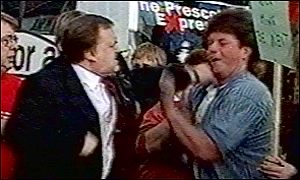