An absence of woozy robots

Feeling antsy. The weather a despicable mix of coolness and and rain with tantalising spots of sunshine. L and I sprang out of bed fairly rapidly for us, and after I bought some bread, we drove off to Bolney to Jo's house where there was an outside plant sale combined with a cups of tea and coffee and bits of cake to raise money for a charity Jo supports.

Lorraine knew one or two folks there. I felt uncharacteristically trepidatious about going to meet a group of people most of whom I did not know even vaguely. It was of course fine when I got there, and in fact nice to be eating a rather nice bite of carrot cake made with ginger and sipping a tea in the open air.

Home again, and we read and faffed about a bit. Lorraine wandering into My Time At Portia, her game. I read a somewhat underwhelming edition of the otherwise excellent Under the Radar magazine, and saw a review of Robin's pamphlet in it.

Shortly before tea time, I went off to buy a packet of crisps, and some tortilla chips and sat down to watch the FA cup featuring Chelsea and Leicester. Naturally I was supporting Chelsea, although I do like Leicester as a team too. Leicester won the game 1-0 but only after a very late equaliser from Chelsea was ruled off side by VAR. If it were offside then it was a matter of millimetres. Lorraine, not at all reading the room, said it was clearly offside. The best thing about this rather close fought and cagey game was that there were actual people in the crowd rather than the chorus of woozy robots that I find make the fare on Match of the Day unwatchable since the pandemic.

After this after this excitement died down, in truth a very little excitement, we ate children's food of quorn sausages, oven chips and baked beans, and then watched a bowser of a film we found on Netflix called Thunder Force.

Between the rain, I did a bit of tidying in the garden. Weirdly the bird bath has developed red algae, so it looks like watery blood. Also some raindrops in Jo's garden. 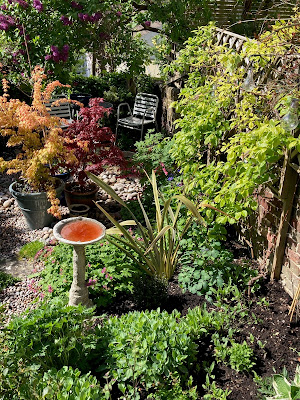 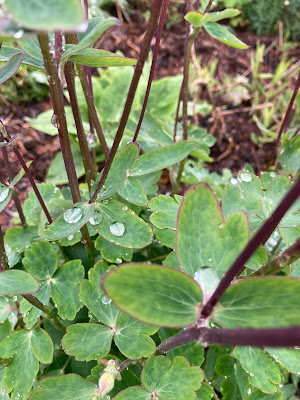