The tedious and reassuring sound of football

Not much happened this weekend. One weekend to go before Lorraine has a week off work, which can't come soon enough for her. Lorraine retreating into My Time at Portia, I read a bit, and looked long and hard at pictures by Paul Klee and thought about asemic writing.

Football this weekend, the last one of the premier league with a smattering of non robots in the crowds as previously mentioned. Chelsea contrived to lose, but still by virtue of Leicester losing too, managed to qualify for the Champion's League again next year. Watching final score on Sunday afternoon, which as the final game of the year is the time when all teams play at the same time. Something both tedious and reassuring about hearing football results.

Lorraine and I did a spot of gardening between the rain. I cut the ivy hedge which made me sneeze. Lorraine and I moving things about in the garden, which is looking rather nice. The water in the bird bath still blood red due to a bloom of red algae. It's like something from a horror story, one in fact I might write.

Roast chicken on Sunday night, which was rather nice. Sam had a vegan pie to go with his veggies. Played cards with Sam on Saturday night a little. Otherwise his sleep patterns put him out of sequence with Lorraine and I.

Ended the weekend by watching a bit of football on TV, then in bed picking up one of my favourite books again, Zen Flesh, Zen Bones. I bought it in hardback, after the copy I have had since I was about twenty gave up the ghost.

Below: Lorraine and I ate scrambled duck eggs on Saturday morning. They are such a delicate colour. I thought I imagined a slightly fishy taste. Lorraine said they were creamy. A bowl of blood in the garden. 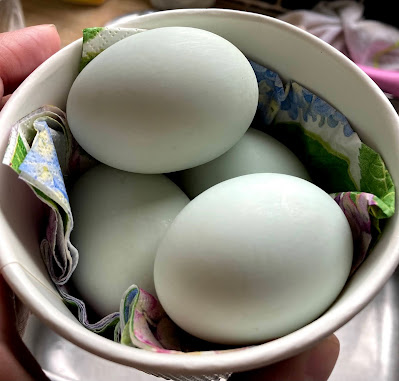 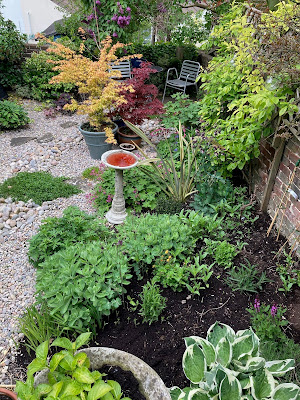