Thoroughly infuriating start to the week. Was automatically texted by NatWest, saying that I did not have enough funds to cover the payment I had made from my business account. I had made no payment of course, and there was another incident of a cheque this time of £270 being drawn on the account. I phoned up and after waiting enormous amounts of time got the security people to flag it up, I will be contacted about it later in the week. This again took well over an hour on the phone, with no immediate resolution.  Left feeling frustrated and angry, having also raised 'an official concern' with the bank.

Meanwhile in the migration of my email to Microsoft 365 through 123-Reg is also farcically slow and difficult. Eventually got an message from their technical people, telling me about the next step. I did this successfully, but then no contact and nothing happened their end. As this means the email I use for my business is offline.

All this futile time wasting nonsense put me in a thoroughly angry mood, which is no basis for writing. Instead I went for a walk up over Hollingbury Hill.

Spoke to Mum, and Anton. Lorraine home after going to her personal trainer again. After dinner, Lorraine and I listened to the eponymous album Lianne La Havas, which is rather good.

Below clouds in gorgeous black and white. 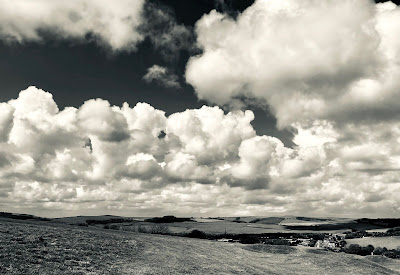