The day before Christmas Eve. Spoke to Mum, whose Welsh neighbours had invited themselves around for the afternoon. She had wrapped presents for Barry, and now couldn't find them which was frustrating.

Some time as sellotape snipper for Lorraine who wrapped presents. Calliope plonked down in the middle of the action of course and got involved with ribbon and so on.

Beth arrived, tired, but with a bit more clarity about when they are moving: probably February. She set to baking things with Lorraine. I floated about feeling a bit worn thin generally. I met up with Anton briefly. We snuck into the very empty Evening Star, from where I am banned for language. I encountered no problems, perhaps because I was with Anton who *looks* respectable. Sent a photo of myself there to the Beermonsters, saying I had been parachuted behind enemy lines and received messages of encouragement from the Monsters. I had missed the place.

Home again, and there were piles of sausage rolls, mince pies and apple pies that Lorraine had made. I was given a my own small apple pie to eat by Lorraine. Jade arrived tonight from London, tired but cheery recovering from the evil cold that's going about to muddy the covid waters.

Below Calliope plonks down in the middle of the action; Agent Kenny blending in. 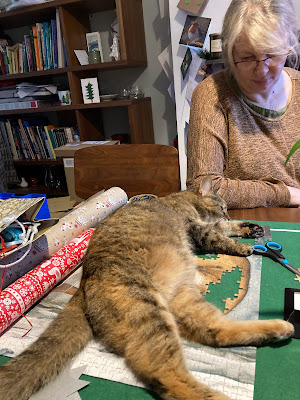 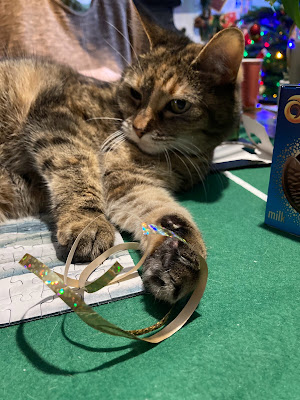 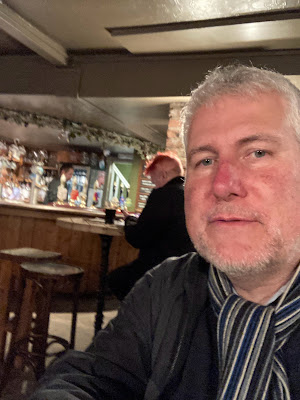