Lorraine, Beth and I off to Kent to see Pat and Maureen. Good to catch up with all of Betty's news in the car. Among other things she has taken to embroidery and made a lovely thing for Maureen, pictured below by tracing a letter from her laptop screen and then ornamenting it. Maureen very chuffed with it.

After a tasty lunch of chicken salad, and a delicious apple and apricot pie which Maureen said she made for me, we all settled down to watch the Men's Final at Wimbledon. Pat and Maureen love their tennis. It was a good game between Djokovic and Berrettini. Both players were interviewed after the game, and they both were very sportsmanlike and complimented the other player handsomely after Djokovic ground out a win. Good to see a bit of decency.

Lorraine drove us home in time for European Cup Final between England and Italy.

England scored in the second minute, but it was all tense and downhill from there. After over two hours of stress it ended with England losing on penalties again, which was disappointing. Still the team had done very well to get to a major final for the first time since 1966, and I had anticipated an Italy win, despite wanting England to do it. But the team is full of decent chaps, and Gareth Southgate the manager is a thoroughly decent, principled and intelligent man.

Below, the embroidery Beth made for Maureen, and Maureen and a very tasty pie. 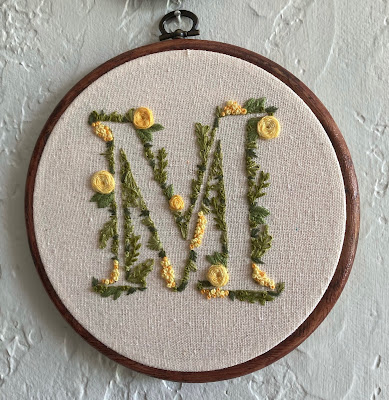 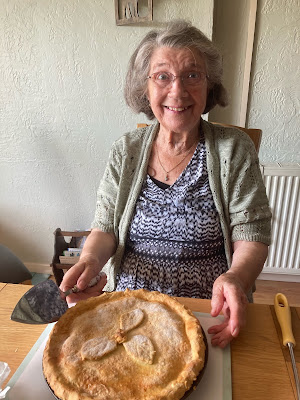