The job I'd been doing with Keith ended today... Not with a bang but a series of minor amends that left us twiddling our thumbs a lot during the day. A bit of a downbeat ending.

I went out for a drink with Anton this evening, a little pub crawl starting at the Shaky Head, then The Eddy to The Caxton, where Anton and I were accosted by a very drunk woman who began swaying over us shortly after she walked in.  During the evening we had been talking a good deal about clothes, as this is Anton's new craze, which I have found myself enthused by too. Anton was sporting a stylish white linen jacket. The woman observed that we were gay and embarked on personal speculations, at which point I told her to stop talking to us.

She fell into a crumpled heap, and had to be helped to her feet saying she wasn't a bad person  and we had to reassure her that she wasn't and so on as she was manoeuvred to the door and released back into the wild. Anton said, as we had an absolute bloody final in The Batty, that he was never wearing that jacket again.

Earlier in the day Sam told me that the dripping from a clean water pipe in the bathroom had got worse, and was now running down the wall in the kitchen. I called the plumber, who will come next week. While I was out Lorraine, had given it a wiggle to try to tighten it, this didn't work and made it necessary to turn the main off in the street. So tomorrow we need an emergency plumber, which is what I should have got in the first place.

A Preston Park fox enjoying a sandwich in the dark. 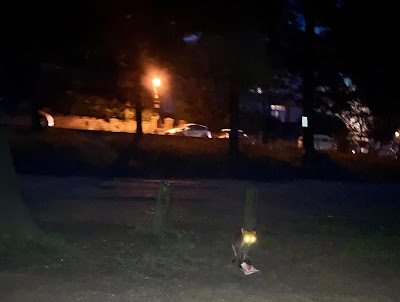