Laughs in the Park

Up this morning, and into the car to pick up a chest of drawers from Innis's late pal Grol's son Tom who is clearing his house on Muesli Mountain. The drawers are going to Beth. Both Lorraine and I thought Tom seemed a lovely guy. Then we zoomed off to Lidl in Hove and mooched about in there buying a few bits and pieces, and some boxes of wine that Lorraine is going to give to her staff.

In the afternoon, I went for a walk up the hill, just to ensure I reached my walking target.

This evening, Lorraine and I strolled down to Preston Park, home of the pop up Brighton Comedy Garden, to see a four standup comedians: Stephen K Amos, who hosted, Shappi Khorsandi, Reginald D Hunter, and Alan Davies. The event was outside with people sat in pairs in little sprayed boxes dotted all over the field. Quite an odd experience, and not like being in a club at all. But nevertheless great to see some live performances. All four seemed rusty to me, especially Alan Davis. But I laughed lots. Reginald Hunter's riff about  grooming success stories, featuring President Macron was hilarious. Stephen Amos just exudes funniness and has a great face. I warmed to Shappi Khorsandi too, being taken off to hospital with a heart scare, while looking at her neighbourhood WhatsApp group to see if anyone had noticed. It was just great to be out with Lorraine doing something different. God I have missed live events. The stage lighting wasn't up to much, and as the sun went low, you had to resort to looking at the huge screens flanking the stages. But even so, the liveness of it was refreshing.

Walked back across the park, which was still buzzing with people. Lorraine feeling queasy when we got home however.

The socially distanced scene in the park, with Reginald D Hunter onstage. You could use an app to order a a tinned drink, which was delivered by a masked runner to the wee square you sat in. 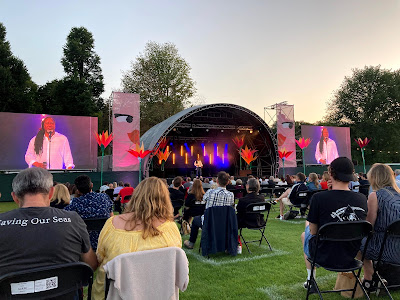