Sam off to Leeds today, where he is going to meet Jade. Lorraine and I had a free day, and the first one of her holiday. We had a very happy day today. We drove Beth and James off to a village called Upper Dicker, which  I found impossible to say without thinking of Carry On comedian Sid James. It was the wedding of James's cousin, who he is very close to. Then onto Seaford, which is not far. We parked in the centre of town, and mooched about and ate in a cafe called Grumpy's where we had some lovely grub at a really nice price. It closes at five, and reopens at six with the addition of candles and becomes a bistro.

We then went into four estate agents to register with them, and have conversations. Seems weird to be doing this kind of thing again, but fun. After this we walked to Steve's house where we had a glass of beer at his place. A lovely garden with a view from the bottom to a pond below. It also had a hidden man cave reached through the side of the house, which he uses as a workshop. He is also a keen clay pigeon shooting man, so there was a bit of that sort of paraphernalia about too. Thoroughly approved of Steve's place, with its instruments and books and prints by Eric Ravilious.

From there the three of us mooched off to get some pub grub called The Old Plough, and a couple more beers (Lorraine driving so couldn't unfortunately). Fond farewells with Steve, then we drove back to Upper Dicker, where we were to collect Beth and James.

On arrival, we were invited into the wedding party, and did some unexpected dancing. I was dressed in a fleece and Lorraine had jeans on among the smartly dressed people, but nobody cared. Julie, James's mum, a lovely warm and welcoming person. I enjoyed talking to her partner Eric too, who is very well read apparently. Beth and James had an excellent day, even having their first ever dance together. Early in the evening the DJ played some James Brown, and Beth told me that she could picture my knees.

Lorraine drove us all, with Beth and James merry and hilarious in the back seats back to their flat, and then we came home ourselves, settling briefly onto the gold sofa.

A lovely day today, and so nice to be able to spend quality time with Lorraine.

Below it took quite a bit of skill to take such an uninspired shot of the long sea front at Seaford. 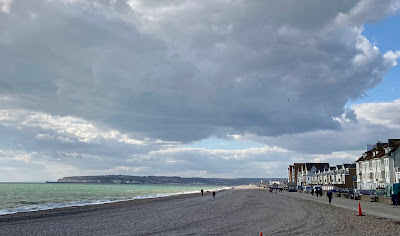