April 16, 2022
So Lorraine got up early this morning and brought up a cup of tea, an effort that made her feel quite shattered. She took a lateral flow test and this was positive, and spent the rest of the day, quite sensibly in bed. She has a cough, and has had a slight temperature. The main symptom is tiredness though, but I did all I could to make her feel okay.
I walked off to Patcham and picked up Calliope's thyroid medicine. It is in liquid form and involves us squirting a small amount down her throat with a little syringe. She seemed very calm about it, and remained very calm and happy all day, as if the medicine had taken an immediate beneficial effect.
The rest of the day in Florence Nightingale mode, looking after my lovely wifey going up and down stairs like an ant carrying foods and drinks and making sure she was okay and feeling her forehead and so on. We have a blood oximeter, which I bought a while ago and her oxygen levels are good. I worry about this a bit as she has been prone to being a bit wheezy in the past.
Meanwhile Jade is improving but Sam says she has been worrying that she has brain fog, which as a professional philosopher is far from ideal.
I also did a bit of writing, and sent some emails. I also watched the semifinal of the FA cup between Liverpool and Manchester City, which was live on BBC. An excellently entertaining game. Liverpool won 3-2 after having an inspired three goal first half, and City trying to fight back in the second half. Chelsea are playing tomorrow against Crystal Palace.
I cooked for everyone, and then had a fairly early night.
A beautiful sunset. Lorraine was sitting with the windows to our Juliette balcony open for most of the day, getting lots of fresh air. I snapped this as the sun had just dropped behind the hill. 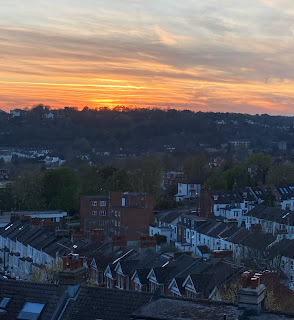