A very sociable day today, at ten I made off in the rain to Rotunda cafe at Preston Park at ten and met up with Adele, Sally, Frances, Deana, Ben and Rick around the corner in the cafe. Nice to chat with everyone, and was amused by Sally talking about her dog's phantom pregnancy. She has just moved to a big new house in the country, and I pictured it teeming with ghostly puppies.

From there I walked into town, and having plenty of time did a spot of shopping -- two new masks --  before meeting Catherine. Turns out I had the time wrong, and actually was twenty minutes late. We had some lunch in the Bath Arms, and slow pint of beer, followed by a pint of soda and lime. Catherine made me laugh telling me about some infuriating feedback on her writing she'd received from a friend. We celebrated her new job, which required her to learn six programming languages. She is a bit of a marvel, and the job sounds great for her, as it is lightly supervised and working from home.

Fond farewells and hopped onto a bus home. After a bit of reading, and a long chat with Mum, Lorraine came home, but feeling unwell again -- hopefully it that hateful cold returned, and not Covid which has broken out among pupils at her school. But she will have a test tomorrow.

Then a small disaster of Friday curry. Lorraine phoned up with the order, and I went to collect it. Arrived at Red Chillies, and they had no order from us. Turns out Lorraine had phoned the Shahi by mistake, so I came home and she drove us down the hill. However while turning the corner up Ditchling Rise to park, we scraped the car on a post in the pavement. Bent the door panels a bit on the passenger side. Gah. I nipped out and collected the curry -- which now had cost us a fortune. Also, because sides come automatically with Red chillies, we collected it but the order had no rice etc.

Went to bed worrying about Lorraine, who was plainly ill again.

Saw lots of lovely people today, but chose to iPhone snap this backstreet puddle instead. 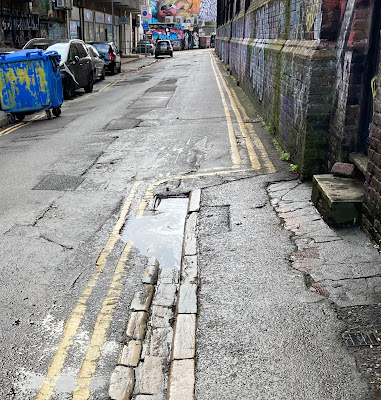