November 28, 2017
So today I was the Voice of God, the disembodied voice that booms out over a conference. I was told to get to the conference room, incredibly impressively decked out with projections, machines, wall posters and so on that I had worked on, for seven. I was five minutes late, but Dan, who was producing the whole show, slept through three alarms and so only pitched up some time after 8, when the show started at 8:30. He and Ash had been working till about four, madly enough. This gave me precisely zero time for rehearsal, and left me subject to the ever increasing concerns of clients, of whom there were more than 400 in the room. This all rather stressful.

Me, as Voice of God, telling people to sit down, and then introducing the main speaker and doing a various bits of commentary during the day. Hard at first as I had no headphones, so was interrupted by myself booming off the walls, but it all settled down. I didn't have much time to be nervous. All was fine. There is a downstairs VOG and an upstairs VOG. I am both. The speakers variable. One quite good, the others corporate clones.

Felt very snuffly and hungry every now and then, and seem to have a bit of a cold, which came in waves. Spent the early evening carrying panels and flipchart boards about and helping the team set up rooms. Eventually went down to the bar, where I ordered a solitary beer and was soon joined by the team. I am growing quite fond of this team now, who are extremely hard working.

Spoke to Lorriane in the evening. Only two more hotel nights now before I'm home. I went to bed at 11ish and began typing this. In theory, though this is tempting fate, it should be all downhill from here. And I began to feel that I would survive it fairly unscathed. One more day of playing God.

My view as downstairs VOG. I was sitting next to Dan, who is here standing on the left. 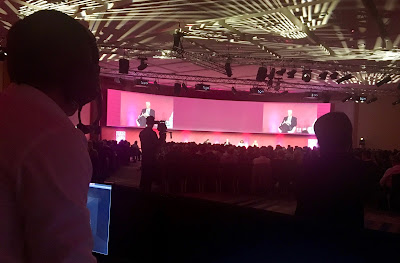