November 15, 2017
A day of slogging, loads of things to be looked at and written to meet certain deadlines. But the day sped by.  I managed to get out for a quick walk along the canals, while eating some sort of baguette. Strangely balmy temperature today.

I escaped work and tubed over to Hammersmith. The line went through Latimer Road, where Grenfell Tower is. The tower is very close to the station, but it was dark and perhaps thankfully I didn't see much. Arriving in Hammersmith felt odd. I knew this area so well for so many years, but I no longer feel I belong to it in any way.

I met Matty boy for a beer in the Thatched House pub in Hammersmith. Walked past one or two other pubs I have had fun nights in over the years.  First time Matt and I been for a beer in ages, and first time I'd seen him since his wedding. As usual, a wide ranging discussion. Felt really nice to see him. He ubered off home and I tubered off to Victoria, where I bought an overpriced chicken pastie and a bottle of sparkling water. Home at around 10:30, having caught a cab from Brighton. The taxi driver started speaking immediately, and he said that he hated the loneliness in his job and having nobody to talk to, when returning from long journeys, etc. until we arrive home. I went straight up to the bedroom, where Lorraine was snuggled in the dark. Calliope creeping onto me to purr noisily as I climbed into bed. It was good to be home.

Lunchtime canal snap. Only after a while did I notice the walled up doors and windows. 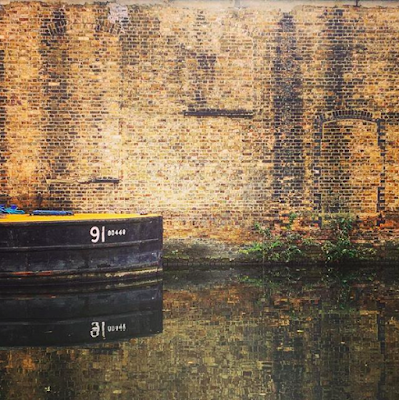