November 25, 2017
Zombied up at seven o'clock in the Hilton Danube waterfront, (six UK time) and packed back the few bits I had unpacked, ironed a shirt and met Den outside smoking a cigarette. The taciturn taxi driver drove us to the Hilton Vienna hotel we are working for 7:30. Den and I talking about Cyprus, where his family are from.

Ash and James had been out on the lash with the client all night. James had just a couple of hours sleep, and made off into Vienna to buy himself some fizzy hangover cure. I was fine, having only had two beers of course. Bloody tired though, with no weekend recharge. Work didn't get started for a couple of hours, a couple of hours I could have happily spent in bed.

Still, a good breakfast, and then working on stuff in various business rooms all day. An enormous stage being built in the hotel. Dozens of people working on this event. Turns out not only am I going to working on various bits of writing as and when needed, but I am also going to be The Voice of God at the event itself on Tuesday and Wednesday. I will be the hidden voice who introduces many of the speakers to the 400 strong audience. Oddly high profile, considering I am just here as a humble hack.

A bite of lunch, standing up, then I moved into my room, a protracted farce with me not being able to use my key card on my door which frazzled my nerves somewhat. Sometimes the simplest things can be diabolically complicated.

Afternoon a steady doing of various bits and pieces. Eventually I was released at 7:30p and crept back to my room where I spoke to Lorraine, who has in Glasgow with Sam and Jade and they were having a lovely day. I am missing Lorraine.

Curiously shaky and weak before I went down to join the others, for dinner at eight. Our group ow abetted by three others from London, Harriet (who is from Vienna and is returning home) Katie and Maria. I had a strangely delicious breaded chicken and a large sort of potato salad, and parsley fried to be like Chinese seaweed. Two beers and I was feeling much better.

Best of all is that it is only just gone 10 o'clock local time as I type this, and we're all not meeting till nine tomorrow for breakfast. The prospect of being able to get some decent sleep is unbelievably attractive.

Below this eyeless face standing for my experience of Vienna. Here, but seeing nothing other than the interior of a large hotel computer screens. 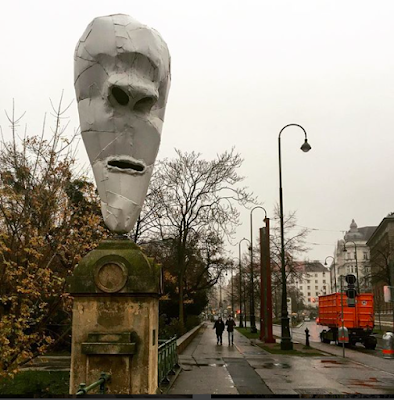