Hours of getting nowhere fast with my manuscript. But can't find a way to fit any of the dozens of poems I have fit together in a way that works.  Maddening. Went for a long walk, but no better when I got back.

Anton says he has joined a gym as his bathroom is being redone and he needs to have a shower. Also a photo below from the Tobster in Mexico City, who is lurking in museums.

Cooked fish curry tonight. Watching a netflix drama Inventing Anna which I am quite enjoying. It's a true story based on a con woman who duped the rich and wealthy of New York.  Anna Sorokin, who calls herself Anna Delvey, was imprisoned for a few years, but is now out and making a name for herself. 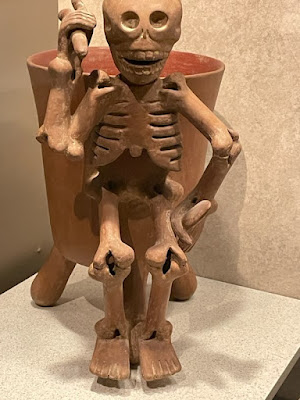